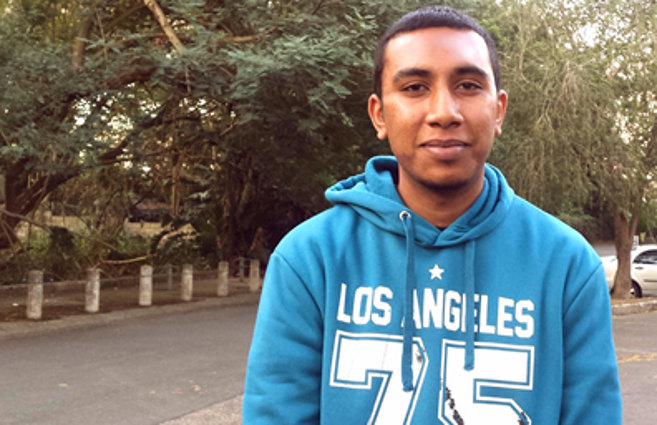 Mr Nolyn John was awarded his MSc in Genetics after conducting a structural analysis of the Mycobacterium tuberculosis redox defence network which revealed a unique bi-fan motif associated with hydrogen peroxide reduction.

The redox defence network refers to all proteins of the cell responsible for aiding in the cells’ survival against reactive oxygen and nitrogen species. John’s reconstruction and structural analysis of the M. tuberculosis redox network included motif detection among these networks to find unique motif designs. He uncovered a distinctive bi-fan motif embedded within the thioredoxin system of M. tuberculosis, a system generally regarded as the central reducing hub of the cell.

‘This was a crucial finding, highlighting the importance of the thioredoxin system within cell defence as well as hinting towards a possible new drug target as thioredoxin inhibition would also affect DNA synthesis, protein disulfide reduction and redox signalling, to name a few,’ said John.

John was inspired to pursue this research owing to the huge global health challenge posed by tuberculosis. He recalls his supervisor encouraging him with the reminder that every little bit of new knowledge contributed is a contribution to a larger picture.

‘I wanted to do meaningful research in the field, investigating novel methods and ideas that could contribute to the larger fight against tuberculosis, a disease which claims roughly two million lives a year globally,’ said John.

‘The results pointing to redox defence networks being prime candidates for drug targets does pique my interest; this could be a new therapeutic avenue in a world where drug-resistance is a growing concern,’ he said.

John who grew up in Pietermaritzburg and attended Deccan Road Primary and Raisethorpe Secondary Schools, completed his BSc in Microbiology and Genetics and his Honours in Genetics at UKZN. He was drawn to the Institution thanks to its broad range of opportunities and numerous research departments. The Institution’s reputation preceded it within John’s community, with the number of excellent graduates a testimony to UKZN’s diligent staff.

John enjoyed the opportunities presented to expand his knowledge, meet other students from different backgrounds and engage in the full scope of his field.

John is registered for a PhD in the same field under the supervision of Dr Ché Pillay, to build further on the preliminary results obtained during his Masters work. He aims to conduct in vitro and in vivo experiments to confirm the bi-fan mechanisms as well as further bolster the computational results obtained.

He thanked Pillay and his co-supervisor, Professor Johann Rohwer, for their guidance, innovative input and encouragement to pursue such fascinating research. He paid tribute to the National Research Foundation for the funding to carry out his studies and relieve the financial burden, while also crediting those in his laboratory, B23, for their help and friendship over the years. He thanked family members Vimla, Wanita and Ashrenee for their support and for keeping him on track, assisting him after an injury and motivating him to complete his studies.