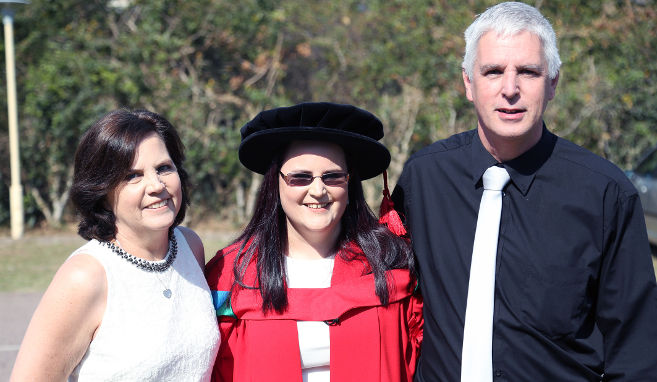 Staring at the night sky on her family farm as a young girl inspired Dr Susan Wilson to become an astronomer.

And inspiration led to reality when she was awarded a PhD in Applied Mathematics from UKZN for her research on the observation of galaxy clusters.

Wilson began her academic career on UKZN’s Pietermaritzburg campus, completing a BSc and an Honours degree in Computational Physics after which she moved to the University of Cape Town to study for a Masters degree offered by the National Astrophysics and Space Science Programme.

After six months of course work, she completed a dissertation through the North-West University under the supervision of Dr Nadeem Oozeer, the operating and commissioning Scientist at the Square Kilometre Array (SKA) South Africa project.

Wilson based her PhD study on galaxy clusters as it allowed her to bridge the divide between theory and observations by delving into both cosmology and astronomy. She focused on galaxy clusters at multiple wavelengths and used those observations to look at the relationships between different properties of those clusters. What was of specific interest to her was determining how those relations changed and evolved over time.

Wilson says the topic involved different aspects of astronomy such as optical, X-ray and radio studies, which allowed her to expand her knowledge and skills. ‘It was a topic that fascinated me as it allowed me to look back in time and see how things have changed or stayed the same.

‘The research was fascinating although time consuming. I enjoyed travelling and networking with other people in my field,’ she said.

Said her supervisor, Dr Matt Hilton: ‘Susan worked on measuring the relationship between gas temperature and the typical speeds of galaxies in distant clusters, using a larger sample of clusters than has been used previously. She analysed data from the Gemini telescopes and the XMM-Newton satellite to do this.

‘She also searched for diffuse radio emission in distant X-ray galaxy clusters, conducting a pilot programme for this kind of work using the Jansky Very Large Array,’ said Hilton. ‘After covering such a broad range in terms of the data analysis techniques needed to do this work she has thoroughly earned her PhD and I wish her all the best for the future.’

Wilson thanked Hilton for his advice and support as well as UKZN’s Astrophysics and Cosmology Research Unit (ACRU) for their encouragement and the Square Kilometre Array organisation for funding her studies. She is also grateful to her friends and family for their love and unwavering support.

Wilson is currently working as a teacher at Epworth School in Pietermaritzburg.