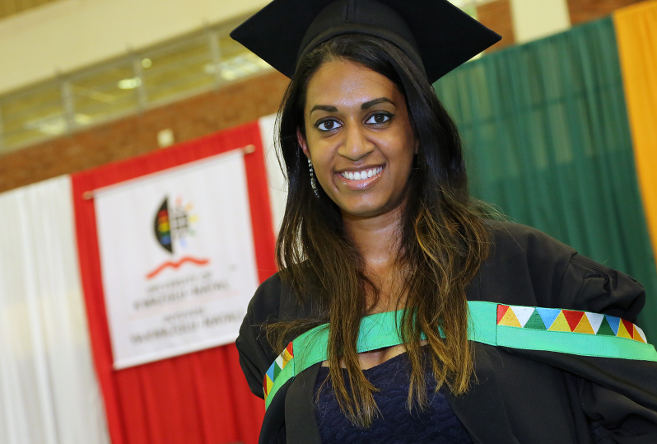 MSc graduate Ms Selisha Naidoo examined ancient bacteria as a window into the past.

Ancient Bacteria Act as “Time Capsules” Providing Insight into the Past

Investigations into the genetic and physiological diversity of bacteria from the ancient Mfabeni Peatland in southern Africa resulted in Ms Selisha Naidoo receiving her MSc in Microbiology from UKZN.

Naidoo analysed how the diversity of the bacteria changed over different time periods across varying climatic conditions.

Her Masters research on the aerobic endospore-forming bacteria involved genetic fingerprinting, sequencing, phylogenetics, melt curve analyses and metabolic profiling. An isolate from radiocarbon-dated material estimated to be 37 900 years old was revived, including a potentially novel bacterial species. Naidoo and fellow researchers also found a species of bacteria previously only isolated from the Antarctic.

Naidoo has always been fascinated by micro-organisms that make life on earth possible.

‘While most micro-organisms are viewed as harmful and pathogenic, many also possess beneficial proteins and enzymes which can be exploited for various applications, including drug discovery, bioremediation, biofuel production, agriculture, climate change and much more,’ she said.

The endospore-forming bacteria Naidoo studied have the ability to remain dormant for thousands of years and can therefore act as “time capsules” that provide insight into the past.

‘We found that these dormant bacterial endospores have the potential to serve as proxies for climatic changes and, with further research, could be applied to investigating environmental changes and the subsequent effects on bacterial diversity,’ said Naidoo.

Ancient peatland regions also harbour untapped and potentially uncharacterised species, which according to Naidoo could be a novel and unexploited source of compounds with potential antimicrobial properties.

Naidoo is now pursuing her PhD in Biotechnology at the University of Western Cape’s Institute for Microbial Biotechnology and Metagenomics (IMBM) with a focus on protein biochemistry and drug discovery. She enjoyed her time at UKZN, saying that her passion for science and drive to excel were fueled here by the influence of some of the best minds in the country.

‘I loved the dedication, commitment and unwavering guidance of the staff and the supportive learning environment at UKZN,’ said Naidoo.

She thanked her supervisor, Dr Charles Hunter, for his tremendous support, guidance and influence and for encouraging her to grow and develop into the researcher and scientist she is today. She also thanked Professor Trevor Hill and Dr Jemma Finch of Geography at UKZN for their input into her research.