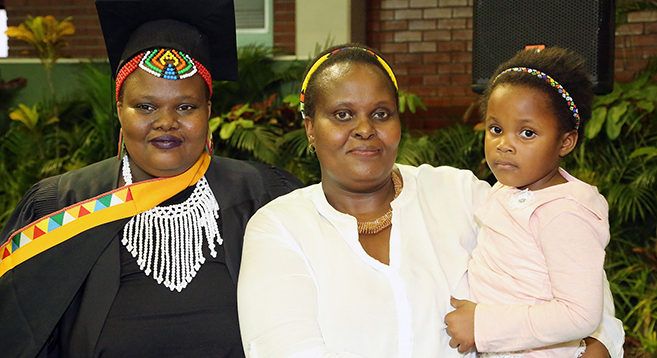 Ms Thandiwe Jumo with her daughter Atinzwa and her mother Siphiwe Ncube.

Jumo, who holds a Diploma and BTech in Journalism from the Durban University of Technology, said pursuing a qualification in a different field had been a challenging but rewarding experience.

‘Undertaking this postgrad qualification has been an eye opener in so many ways,’ said Jumo. ‘While I enjoyed the different components of the programme such as studying entrepreneurship, business law and business strategy, I really struggled with finance and accounting which led to me failing the module and not graduating in April.’

Although disappointed by the minor setback, tenacity and having a great support system ensured Jumo triumphed in the end.

She met with Wies on a weekly basis and he became a rich source of motivation with his calming presence helping her learn that panic is nothing more than a signpost for success that is just over the horizon.  ‘He really was my rock,’ said Jumo.

Jumo paid tribute to her family, Wies and her colleagues, especially the College’s Director of Professional Services, Dr Kathy Cleland, who she says was one of her greatest supporters, cheering her on even when she was hesitant about checking her final results. ‘UKZN needs more leaders like Dr Cleland who values and fosters our academic development,’ said Jumo.

Jumo says juggling work, home responsibilities and part-time studies was quite a challenge in which her mother played a major role by inspiring her to persevere.

‘My mom, who is a trauma nurse at the Nelson Mandela Academic Hospital in uMthatha, came to live with me while studying for a Bachelor of Nursing Advanced Practice qualification with the College of Health Sciences,’ said Jumo.

‘In the two years she was studying she encouraged me to do my BTech which I completed last year. While I was busy she took care of my four-year-old daughter and my household duties. My mom, a bastion of self-empowerment, showed me that persevering women can accomplish anything they put their minds to and although our plan was to graduate together in April, I am glad that we graduated together in 2017,’ said Jumo.