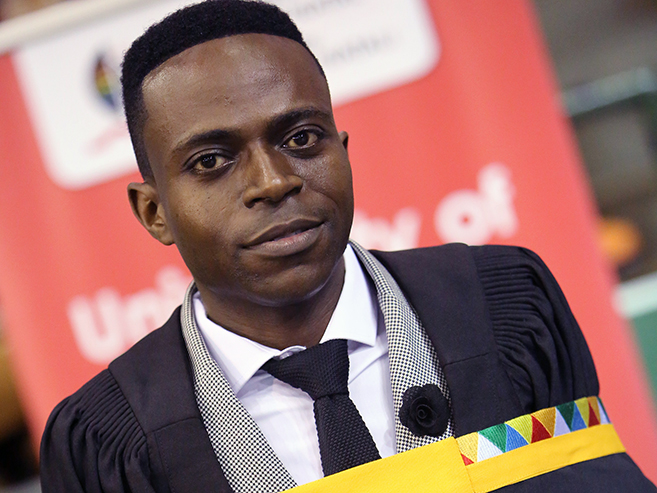 BCom Graduate Dreams of Being a Successful Entrepreneur

UKZN Enactus alumnus Mr Christian Ishimwe has graduated with a Bachelor of Commerce in Economics and Management degree taking him a step closer to fulfilling his dream of becoming an entrepreneur.

Ishimwe, a communication and marketing intern in UKZN’s Corporate Relations Division, says he is grateful for all the opportunities the University has given him.

‘Choosing to come to UKZN was life changing for me and I have had the opportunity to grow in a diverse environment,’ said Ishimwe.

‘One of the opportunities was being part of an Africa Design Challenge (ADC) 2017 team. ADC is a youth innovation competition designed by Innovate Durban, in which participants are challenged to find solutions to social problems affecting cities in Africa,’ he added.

ADC winners will be announced in October

‘We have developed a system using a cell phone app or online on the computer which gives people in a developing city, where transport technology is not advanced, the opportunity to efficiently plan and use all possible transport available to them.  The system also allows people in a city to pay and access hotels, restaurants, conference centres and events tickets.  Making payments through our system eliminates the need to carry cash or cards thus making a city more efficient and safe,’ said Ishimwe.

Ishimwe dedicated his BCom degree to his parents who encouraged him to study further after completing high school.

‘I had my own ideas of travelling the continent after my matric, but my parents pointed out the importance of education and I will forever be grateful to them for that,’ said Ishimwe.