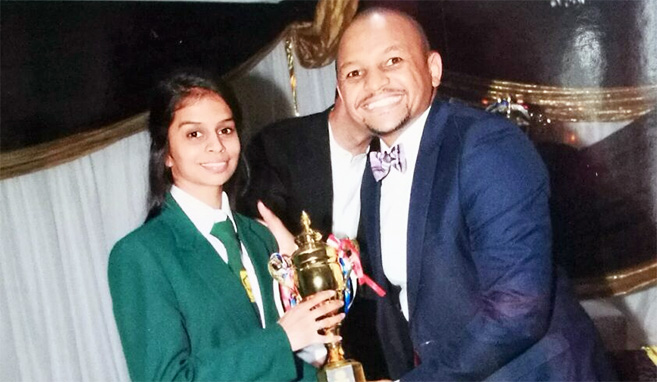 A UKZN student has earned herself the Protea colours for being a South African Karate Champion.

Ms Sanhaviya Sookrajh, who is pursuing an Honours degree in Exercise Science, was awarded Protea colours following a good showing at a competition held in Zambia in 2016 where she achieved gold, silver and bronze medals.

‘It is difficult to balance my studies and participation at competitive levels – I must admit that I always chose sport over academia! However, being an Exercise Science Honours student is a distinct advantage as I have a deeper understanding of fitness programmes and diets that promote ultimate performance,’ she said.

Sookrajh draws her motivation from her parents, Reshma and Rohith Sookrajh, both retired academics from UKZN. ‘My parents have completed 12 Comrades Marathons. Their boundless energies offer me complete inspiration,’ declared Sookrajh.

Sookrajh owes her introduction to Karate to Yajur Chotai who runs a dojo (SKKSA) in Shallcross. She joined the dojo about 10 years ago.

Her massive medal haul includes those earned at regional and national competitions. She has been placed first at several AUSC Region (Zone 6) tournaments in Zambia and Zimbabwe and has enjoyed the South African team spirit and experienced competing at some form of international level at these tournaments.

The Commonwealth Karate Championships in Sydney, Australia 2011, was her first exposure to an international tournament as a Protea athlete.  Here she won a silver medal in her individual category, and won the crucial bout to win a bronze medal for the South African junior female team amid tough competition.