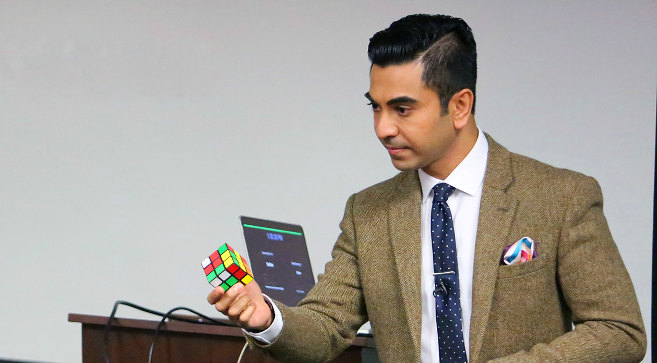 Mo Magic delights alumni and fans at UKZN with the art of magic.

After reading for a BSc (Electronic Engineering) degree at the University of KwaZulu-Natal, Mahommed Moorad, popularly known as Mo Magic, started out his career as an engineer at Toyota, but quickly realised that while he loved engineering, something was missing from his life.

While preparing for an assignment with a classmate, he saw world-renowned magician David Blaine on the television and after seeing the looks of “delight and excitement” on the audience members faces realised he had missed his “calling”.

Addressing alumni at an event hosted by UKZN and the Durban Alumni Association, Mo Magic said that weekends spent on self-reflection and personal development classes coupled with researching magic led him to make the decision to become a full-time entertainer.

While he has followed his passion for magic, he credits his degree in engineering and his time spent with Toyota for laying the groundwork for his successful career in entertainment. ‘As long as you have a degree, you have all your bases covered. As an engineer, I learned how to think and execute plans – how to take a problem and break it down into its simplest form,’ he said.

Highlights from his career spanning over 15 years include a highly successful television series on SABC 3 and being profiled on Top Billing. ‘When I was ready, the universe knew,’ he said.

The results orientated magician and entertainer says choices and decisions have consequences.  ‘People speak a good game, but for me as an engineer, results matter.’

Mo Magic is an example of someone who has parlayed his degree into a highly successful career. To find out more about his fascinating and magical journey through life, visit: http://www.ukzn.ac.za/our-stories/mahommed-dawood-moorad/