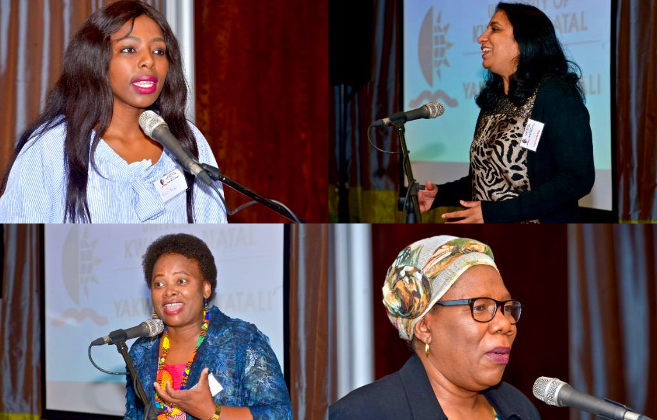 Leadership Comes Under the Spotlight at Imbokodo Workshop

What makes a good leader and what are the main challenges facing women in the workplace? These were some of the questions discussed at a recent “Imbokodo – A Women in Leadership” workshop.

Held at Coastlands Musgrave in late July, the workshop was hosted by the University of KwaZulu-Natal’s Human Resources Division in partnership with Corporate Relations. The workshop brought together a number of respected women leaders at the University who have and continue to make a mark in their respective fields.

Human Resources’ Mrs Busi Ramabodu said Imbokodo had been conceptualised to inspire women leaders to achieve greatness while it also serves as a platform to engage on issues and for women at the University to network.

Executive Director of Student Services, Dr Roseline Laka-Mathebula, explored the courage to lead with authenticity, a concept initially explored by the University of Worcester’s Dr Fiona Beddoes-Jones. ‘They say that leadership is not for the feint-hearted. Anyone who says otherwise has probably not tried to lead,’ said Laka-Mathebula.

She emphasised the importance of having the courage to be different and being true to oneself.

Having grown up as a “village girl from a very rural area”, Laka-Mathebula had the courage to pursue her dreams and became a scientist, majoring in immunology. She then ventured into the “crazy world” of academic management.

Twenty-three-year old Ms Noxolo Bhengu, who serves as the Central SRC President at UKZN, said being a woman in leadership means you have to “constantly fight for your position”.

A 5th-year Medical student, Bhengu juggles her leadership role with her demanding academic studies, while serving over 47 000 students at the University.

She cautioned against the “PhD” or “Pull-her-down” syndrome often experienced by women in the workplace. ‘It takes a united front to fight against issues like gender inequality,’ she said. ‘It’s not just a female struggle; it has to be a societal struggle.’

Dean of Research Professor Urmilla Bob spoke about her experiences as a student leader at the University of Durban-Westville in the 1980’s. Bob, who was a student activist during the struggle against apartheid, spent several months in detention before writing her exams.  Echoing Bhengu, she said, ‘There is no greater power than investing in education.’

Bob cautioned against bullying in the workplace and slammed “professional bullies” who use their titles instead of empowering the next generation.

She said leaders who are unhappy are dangerous in the workplace and that insecure people are a “recipe for disaster”.

‘These issues do not just occur at the University but happen globally’, she said.

Bob said that good leaders are selfless, nurturing, caring and understand that there is a difference between popularity and respect. She stressed the importance of being knowledgeable in your field and being decisive.

Acting Dean and Head of the School of Arts, Professor Nobuhle Hlongwa, referred to herself as a ‘servant leader’. She said good leaders should be resilient, humble and ‘build networks of people that work around you’.

Echoing Professor Bob, Hlongwa cautioned against bullies in the workplace. ‘Please don’t divide and rule in your environment. Bullies create camps in the organisation,’ she said.

She also cautioned against the “PhD” syndrome: ‘As women, we are supposed to support one another – don’t pull others down.

‘Get skills that will allow you to meet the requirements and don’t assume you will be favoured because of your gender,’ she said.

Acting Executive Director of Corporate Relations, Ms Normah Zondo, thanked all those who had made the event a success. The Director of Library Services, Ms Joyce Myeza, served as Director of Proceedings.