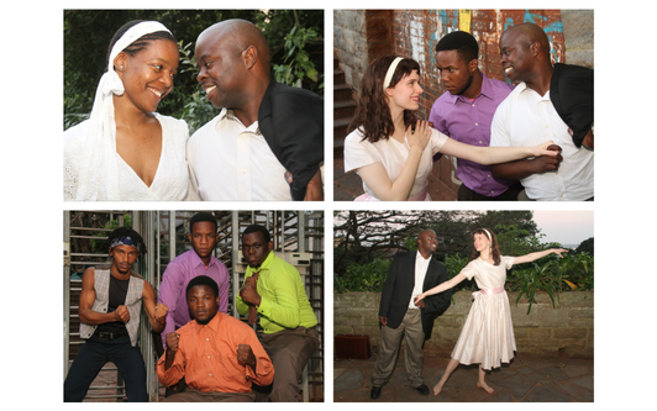 Professor Barbara Hill Moore from SMU is the Musical Director and organiser of the production in collaboration with Director/Choreographer Mr Roger Bennett Riggle, coach accompanists, Jason Smith and David Smith together with UKZN Music lecturer Mr Lionel Mkhwanazi. The Westside Story performance is the outcome of a class project in Musical Theatre Workshop led by Professor Hill Moore at SMU.

The story takes place in the Upper West Side neighbourhood of New York City in the mid-1950s. The story, with a modern Romeo and Juliet theme, covers the rivalry between the Jets and the Sharks, two teenage stree gangs of different ethnic backgrounds. The members of the Sharks, from Puerto Rico, are taunted by the Jets, a white gang. Tony, a former member of the Jets is best friends with the gang leader, Riff. Tony falls in love with Maria, the sister of Bernardo, the leader of the Sharks.

‘It is said that this focus on social problems marked a turning point in American musical theatre. Our students worked together to understand the relevance of the message of West Side Story in today’s culture both in South Africa and in America,’ said Hill Moore.

She states that the Westside Story project is one of five projects presented since 2011. ‘It introduces SMU students to this uniquely American form of music, the work involved in learning and producing it through close collaboration with students and staff at UKZN.’

‘It also provides an education about South Africa, its people, and the similarities of the cultural and social impact possible through this genre on both societies.  We have produced Carousel, South Pacific, and Oklahoma and this is the second Westside Story production with the first one opening in 2011,’ added Hill Moore.

Professor Hill Moore is a frequent visitor to South Africa.  In 2006, she directed the opera Porgy and Bess by George Gershwin in a similar collaboration with students from UKZN. Having worked with UKZN students in past years since 2000, she has offered VISA support and Full Bursary opportunities to 19 students for graduate study at SMU.

‘The students and faculty were excited about working on this beautiful repertory and presenting it to the community of KwaZulu-Natal for the second time.  The show was enjoyed, embraced and understood and we hope that learning this ageless story and music will improve their ability to understand, articulate, tolerate, and respond respectfully to the cultural differences they experience while collaborating with UKZN staff and peers,’ she said.

According to UKZN Music student Ms Ayanda Nkosi, the production enabled her to grow as a performer. ‘This is a learning experience for both UKZN and SMU students. We have enjoyed working on this production and getting to know the SMU students.’

SMU student Ms Neha Husein added: ‘It’s been an amazing experience to work on this production and with the cast. It was particularly exciting to see the progress and growth we’ve made. We’ve learnt so much from each other, even a bit of isiZulu, and we will be keeping in touch with each other.’