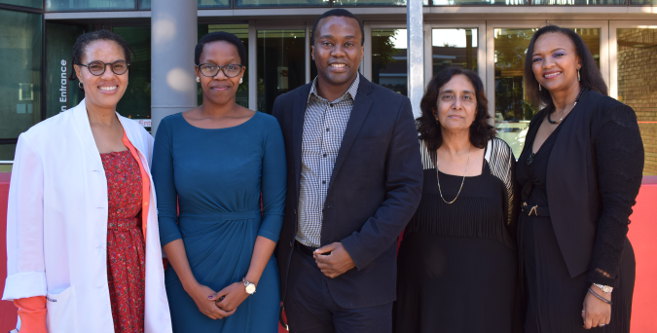 Experts from Psychiatry and Dermatology converged to put their heads together on how to help patients who suffer from psychocutaneous disorders at a recent Symposium hosted by the College of Health Sciences.

This interdisciplinary tea session, hosted at the Nelson Mandela School of Medicine, was the brainchild of Professors Bonga Chiliza and Ncoza Dlova.

They observed that at least one third of patients attending skin clinics are impacted by emotional and psychological factors and as a result an interaction between mind and skin was noted.

A psychocutaneous disorder is classified into two things, one is how health and psychological factors can affect the skin. ‘So people with skin conditions like for example acne, will start picking on it and thus making it worse or some people will have no skin conditions originally but when they are stressed they will start plucking their hair, scratching their skin so then that causes skin problems.’

Pertaining to the diagnosis of this ailment doctors investigate the history of the patient in order to ascertain environmental contributors. Additionally, clinical suspicion, psychiatric assessments, confirmatory tests and typical features of the dermatoses are observed.

The key objective in this gathering was to promote the early diagnosis and referral of patients with psychocutaneous disorders to Psychiatrists. This transfer often proves problematic as there is a negative connotation attached to seeing a Psychiatrist. Therefore, it was concluded that collaboration at the point of contact with a patient was the best execution going forward.

The experts were able to learn from each other and move forward armed with practical and applicable knowledge.