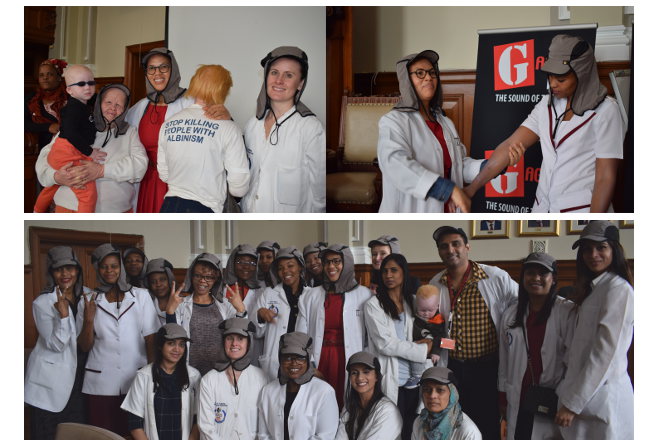 Albinism Should Not be a Limiting Factor

The University of KwaZulu-Natal’s (UKZN) Department of Dermatology recently partook in an outreach initiative to raise awareness about albinism and skin care. This event was a joint initiative by the Albinism Society of KwaZulu-Natal, UKZN’s Department of Dermatology and Gagasi FM. The event, held at Durban City Hall, was attended by a large number of adults and children with albinism as well as their family members and friends.

The event was supported by Biersdorf and Galderma companies that sponsored sun protective hats and sunscreen products for those who attended the event.

During the event, dermatologists focused on skin care and protection against the sun as a means of preventing skin cancer.

Skin is classified as the largest body organ which protects against infections, sun damage, water loss, and aids with temperature regulation amongst other functions. Within the skin there are melanocytes which are the cells that produce the natural pigment “melanin” thus protecting our skin from the ultraviolet rays, which can cause many types of skin cancer.

‘Avoiding sun exposure is crucial in Skin Cancer Prevention, paying attention to early warning signs like red , itchy  and blistering  of the skin and attending your local skin clinic for regular six monthly skin checks so skin cancer can be picked up early is highly recommendable,’  expressed Dr Sishange, a Dermatologist based at the  King Edward Hospital.

Albinism is an inherited condition where an individual is unable to produce normal colouring of the skin, hair, and eyes (due to the lack of melanin pigment). The condition can be limited to the eyes or may involve both the eyes and the skin. People with Albinism lack this pigment and therefore are susceptible to various types of skin cancer.

‘Patients with albinism have always been ostracized and not much is known and understood about albinism. As a Dermatology department we recognise the importance of increasing awareness and understanding about this genetic skin and eye condition so that we can fight against discrimination and stigmatization,’ said Professor Ncoza Dlova, Head of the UKZN’s Department of Dermatology.

Chairperson of Albinism Society of KwaZulu-Natal, and UKZN lecturer Bhekisa Maxwell Thabethe encouraged young people with albinism to excel in education and be comfortable in their skin. ‘People with albinism are capable of achieving anything they wish for or dream of in life and their skin condition should not be a limiting factor.’

Seventy-four-year-old Queen Kubheka from Dabeka Township said that the killing of people with albinism is inhumane and a barbaric act that has no place in a democratic society.

12 Facts  to know about Albinism

The Department of Dermatology and the Albinism Society of KwaZulu-Natal plan to hold a second albinism awareness event in kwaDabeka Township in September.