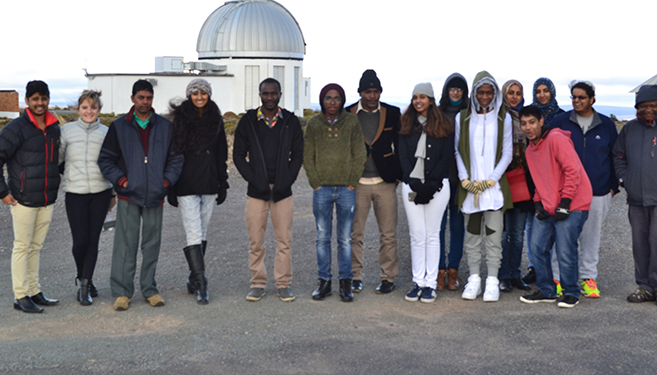 UKZN honours and masters students heard about South Africa’s advances in Astrophysics and Space Science during a four-day tour of research facilities in the Western and Northern Cape provinces.

The tour was organised by the UKZN node of the National Astrophysics and Space Science Programme (NASSP) which is a multi-institutional postgraduate programme, funded by the Department of Science and Technology (DST) through the National Research Foundation (NRF).

Based in the School of Chemistry and Physics, the programme aims to train graduates in astronomy, astrophysics and space science who come from various institutions across the country and as far afield as Malawi, Ethiopia and Kenya.

According to Academic Leader of the UKZN NASSP node, Professor Sivakumar Venkataraman, the programme will contribute to strengthening UKZN’s space science and astrophysics teaching and research as well as build capacity in the field in South Africa.

Venkataraman and Professor Thebe Medupe of North-West University, the site of one of the other two South African NASSP nodes, joined the tour which was attended by 14 students. The group visited the University of Cape Town node where they were hosted by its head, Professor Kurt van der Heyden.

The tour involved a visit to the South African National Space Agency (SANSA), hosted by chief scientist Professor Michael Kosch who gave a lecture and practical exercise in which he discussed sprites and their relevance to South African weather and atmospheric science.

The group visited the Houwteq Space Centre, a subsidiary of Denel Spaceteq, where Mr Deon Lategan spoke on satellites developed by Denel, a proudly South African company, with the focus on the Sumbandila satellite.

‘It’s unbelievable that we here in South Africa have created this technology - it makes me proud to be a South African, to expand NASSP and put young scientists at the forefront,’ said Medupe.

The group also visited Sutherland, where they went on a night tour of the astronomical facility to view stars and planets through telescopes. At Sutherland, they also went to the Southern African Large Telescope (SALT), the largest optical telescope in the southern hemisphere, which is breaking ground in terms of scientific and astrophysical research advancement.

‘This was the first time I have seen stars that close up,’ said Mr Bernard Mmame, a masters student from Malawi.

Students on the tour said the experience had been invaluable in exposing the infrastructure and potential available to South Africans and Africans through NASSP. The group thanked everyone involved in making the trip successful.