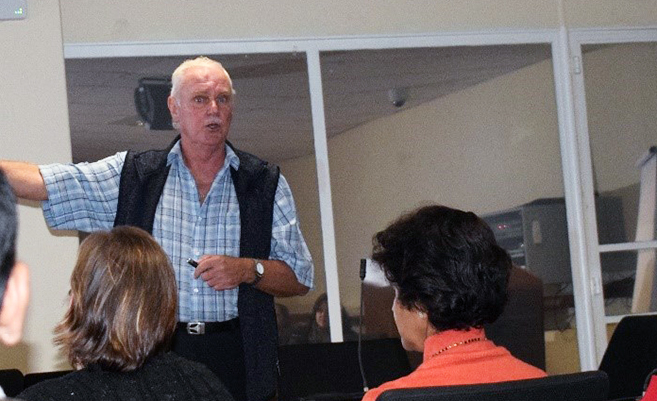 East Coast Radio’s “Traffic Guy” Mr Johann von Bargen giving tips that save lives on the road during an address to the College of Health Sciences staff.

Drive Safely and Reach your Destination – Advice from “The Traffic Guy”

During many years of giving traffic update reports on East Coast Radio he has become well known to listeners as “The Traffic Guy!”

Von Bargen began his presentation by listing the three main causes of a skid - dry tyres on slippery surfaces, loss of traction and sudden braking. In other words, forward momentum and directional forces - which a driver is in charge of - against centrifugal forces - an adverse effect of those forces which indirectly a driver cannot control.

He also spoke about driving through water safely, saying the idea is to apply the dead leg (DL) technique .i.e don’t brake when approaching a puddle but rather stop accelerating!

Using practical examples in each section of his talk he had the undivided attention of his audience.

Von Bargen emphasised that defensive driving was all about avoiding collisions. He discussed two types of collisions - big collisions and testosterone collisions saying the goal should be to avoid accidents, even if it is others who make the mistake.

His three-step collision prevention formula is: (1) Look for dangers, (2) Decide what to do, and (3) Do it right away.

He said many accidents were caused by motorists not keeping a safe travelling distance between themselves and other road users. A safe following distance gives motorists time to react.

He completed his talk with an explanation of advanced driving techniques.

The audience came away more empowered to play a significant role in the reduction of road accidents, by being more observant on the road and practising basic driving courtesy.