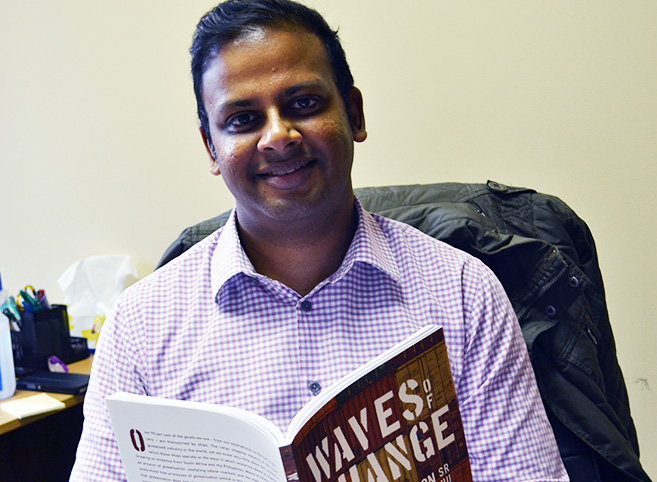 ‘The story of seafarers and shipping that I tell in this book is really an account of how global capitalism is reshaping every aspect of work and workplaces. Whilst the book focuses specifically on the maritime industry, its arguments can easily be extrapolated to most other occupations and industries,’ explained Ruggunan.

The book which is linked to Ruggunan’s decade long research and interest in global labour markets and seafaring as an occupation explores how the cargo shipping industry is the most globalised industry in the world and yet there is very little about the context in which these ships operate or the ways in which seafaring labour is organised.

‘I am continuing with this vein of research by examining how other professions reconfigure as a consequence of global capitalism.  The book is targeted at those with scholarly interest in how global labour markets are formed under capitalism. However, it will also be of interest to those outside of academia who have a lay interest in these matters. Industrial Relations, Human Resources Development, Labour Studies, Industrial Sociology and Economics scholars and students may also find it of some interest,’ said Ruggunan.

Dr Marcus Bowles, Director of the Institute for Working Futures and Professor at the Australian Maritime College at the University of Tasmania said the book ‘highlights the complex and often poorly understood world of the global shipping industry and the seafarers who carry more than 90% of the world’s trade by volume.’

‘As one of the oldest global industries, the book challenges the simplistic capitalistic and neoclassical ideals that subsequently argue for nation states to leave the commercial fate of any domestic shipping industry to global market forces. Instead the author asks many critical questions, the author shows that globalisation does not always mean a “race to the bottom” for workers: labour solidarity and interventionist states shape globalisation as much as ship owners do,’ he said.