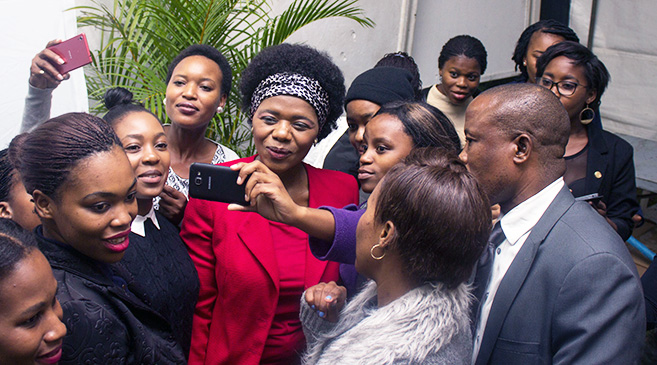 Advocate Thuli Madonsela encouraged scores of young Law students who attended her recent address at the Pietermaritzburg campus to use their legal talent to transform society for the better.

The address was part of the Law Profession’s Day organised by the School of Law and held annually in Pietermaritzburg and Durban.

The event involves South Africa’s top legal firms advising students on a variety of career paths available to them within the legal profession and also provides a platform for firms to recruit the University’s top Law students.

Madonsela’s inspirational talk covered how she executes her role as the Public Protector independently, transparently, ethically and in line with the Constitution and how President Jacob Zuma is happy with her performance; she shared how her daughter who was in her second year of Law studies at the time, had pointed out immediately after the Oscar Pistorius judgment, why Judge Thokozile Masipa was mistaken about the concept of dolus eventualis. Remarking that this was evidence of the power of young legal minds, Advocate Madonsela called on students to find their place within the legal profession and to start their own social justice movement.

‘The role played by lawyers in society gives meaning to the provisions of our Constitution. The role of young lawyers is in supporting Chapter 9 of the Constitution, strengthening our constitutional democracy and guiding citizens of their legal rights. Don’t do what you found being done but read the law for yourself,’ she said.

Madonsela also advised students not to think that law was limited to the courtroom but to also consider careers in the office of the Public Protector and in academia especially in institutions such as the African Ombudsman Research Centre where fresh ideas and skills were needed to strengthen good governance in Africa.

The Dean and Head of the School of Law, Professor Managay Reddi, said through events such as Law Professions Day, the School not only strengthened ties with the legal profession but it was also a way of ensuring that the legal training offered at the School was of the highest standard and up to date with the latest developments in the profession.

In his message, Deputy Vice-Chancellor and Head of the College of Law and Management Studies, Professor John Mubangizi, emphasised that the College remained committed to providing excellent legal education with the aim of producing responsible graduates who would in turn contribute to the strengthening of the legal profession and the development and consolidation of a constitutional and democratic society.