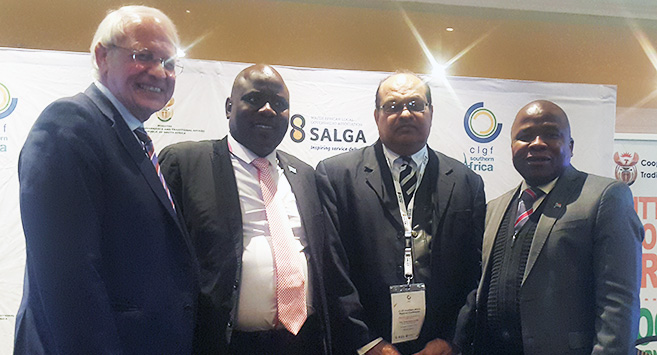 The CLGF has been implementing a regional programme on Decentralisation and Local Economic Development (LED) in Southern Africa, with a view to enhancing the capacity of local government in service delivery, and ultimately achieving the Sustainable Development Goals (SDGs).

It has supported the implementation of pilot projects in 15 municipalities in South Africa, Botswana, Zambia, Swaziland and, more recently, Malawi and Lesotho.

The Conference organised jointly by the South African Department of Co-Operative Governance and Traditional Affairs and the South African Local Government Association (SALGA) was held as part of the strategy to facilitate the exchange of experiences and develop the knowledge base within the region.

It was attended by the Ministers of Local Government from the Southern African Development Community (SADC) Region, executive municipal functionaries and high ranking local government officials from national governments, representatives of local government associations and development partners regionally and continentally.

Reddy also chaired a session on Sharing Country Experiences on LED: Initiatives, Good Practices and Challenges. The key issues highlighted included inter alia, lack of a broad and shared understanding of the LED concept and the ability to contextualise it within local government. ‘Many structures and entities within the municipality are involved with LED, however, they are not aware of it; some lack a national policy and legislative framework or the required institutional arrangements to facilitate the process and provide an enabling framework,’ he said.

According to Reddy political stability particularly in developing countries; sustainability of the LED initiatives and diversification of the local/provincial and national economy; stakeholder management and good co-ordination are some of the key ingredients for ensuring successful LED in local government.

‘The need for LED needs to be mainstreamed and integrated into all local government policies and monitoring and evaluation has to be built into the process to ensure success in local economic development,’ added Reddy.