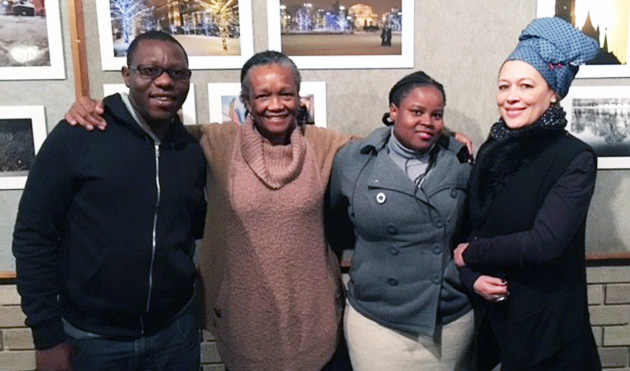 Their visit was made possible by special sponsorship from the Deputy Vice-Chancellor and Head of the College of Humanities, Professor Cheryl Potgieter.

Potgieter, who takes her leave to attend the Festival every year, decided to send Hlongwa and Gumede to experience the National Arts Festival, especially as some of the content of this year’s Festival tied in with and complemented work the two staffers do for Time of the Writer, the Durban International Film Festival, JOMBA! Contemporary Dance Experience and Poetry Africa.

Potgieter believes sending CCA staff members who specifically work within the sphere of film festivals ‘is crucial because to have the opportunity to engage and network in different spaces, ensures continued growth of ideas. It’s important at any stage of one’s career.’

Potgieter has been attending the Arts Festival for many years, and while there, she engages with several emerging filmmakers and writers, creating links between them and UKZN’s College of Humanities.

Gumede, who attended the Arts Festival for the first time, described it as multidisciplinary and diverse. ‘It was a great experience to be exposed to another festival especially as we often work on CCA festivals in the role of the organiser, hardly getting to fully participate and engage in the content.  Attending this Arts Festival allowed us to fully immerse ourselves as critical audience members,’ he said.

An event they attended with Potgieter was the screening of the 2008 documentary Triple Bill that examined the role the apartheid media played in gross human rights abuses. The documentary was made by award-winning South African journalist, filmmaker and writer, Sylvia Vollenhoven. Potgieter then attended Vollenhoven’s book launch and her subsequent production Keeper of the Kumm.

‘To see some of the documentaries that we have previously screened at DIFF being shown at the arts festival and to interact again with some of the artists we’ve worked closely with, shows that we’re doing something right as custodians of the four CCA festivals in exposing film talent and contributing to the art and film industry,’ said Gumede.

UKZN had a strong jazz and theatre presence at the Festival and Potgieter attended a jazz performance by the University’s music students. UKZN also presented a staged production by the Drama and Performance Studies students. Both events attracted a large audience.

Hlongwa and Gumede were also happy to see other UKZN staff members, particularly from the School of Arts, at the Festival.