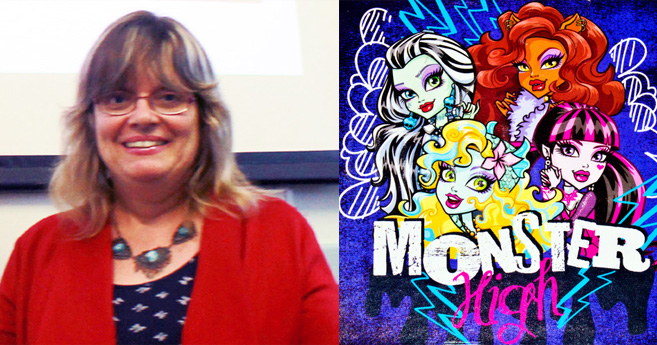 As part of the Classics Research Colloquium in the School of Religion, Philosophy and Classics (SRPC), Lecturer Dr Suzanne Sharland spoke on: “Classical Antiquity in Contemporary Children’s Media and Literature: the case of Monster High”.

Monster High is an animated TV series that features the lives of a number of high school students at a fictional academy for the offspring of famous monsters from literature, film and legend such as Draculaura, adopted daughter of Dracula; Abbey Bominable, daughter of the Abominable Snowman, and Operetta, the child of the Phantom of the Opera.

Sharland questioned whether: ‘the classical allusions in Monster High are incorporated in an intelligent manner and if this usage of classical antiquity represents a “dumbing down” of the classics or rather a useful way in which to introduce the young to the imaginative creations of antiquity’.

She also acknowledged that the series and its associated dolls, marketed and sold by Mattel-the company which produced Barbie, have been criticised for presenting young girls with hyper-sexualised, idealised and misleading images of women. ‘They have also been taken to task for supposedly jumping on the anti-bullying bandwagon.’

Sharland observed that the majority of monsters to emerge from Greek mythology were female. ‘But being a monster can be empowering, and other critics have suggested that the presentation of a high level of individuality in each of the characters in Monster High, as well as the series’ tacit acknowledgement that everyone has their strengths and flaws, encourages young viewers to accept their own differences and to focus on the things which make them unique,’ she said.

In her concluding remarks, Sharland said: ‘Although I sometimes find it a bit exasperating, the series’ engagement with classical myth, literature and history is ultimately, for me, a very creative and witty endeavour. It is itself a unique take on classical antiquity. In the words of the school’s tripartite motto: ‘Be yourself. Be unique. Be a monster.’