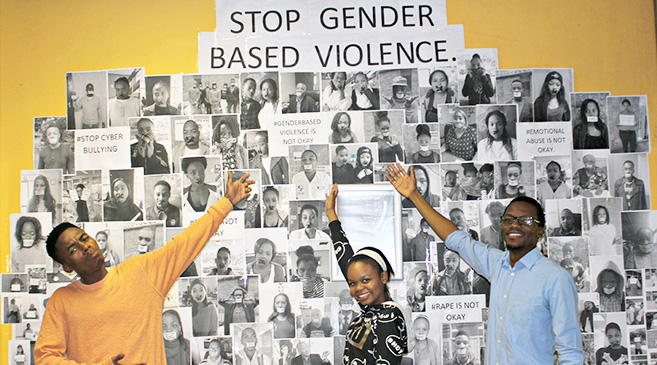 The campaign includes a wall near the main cafeteria displaying photos of UKZN students and staff who are against gender-based violence and cyber bullying.

CEO of the CDA Mr Nkonzo Mkhize said: ‘It started with a message of support from the association to students who are survivors of gender-based violence. The campaign is a result of seeing what is happening in South Africa and the silenced voices of students at Edgewood campus, who have no space to share their stories and experiences of gender-based violence and cyber bullying.’

Supporting the campaign, the Acting Dean and Head of the School of Education, Professor Thabo Msibi, said: ‘I’m very pleased that CDA students have started such an important campaign.  Given the occurrence of gender-based violence on our campuses and in our residences, it is important that as the University community we respond proactively and vigorously to change the situation.  Our University has to be a safe space for all students, and I believe this effort from the CDA will assist in achieving that.’

As part of the campaign, the CDA has organised a Share your Story night, providing victims with a space where they can share their experiences and find closure and support. The sessions will be guided by the campus counsellor.

The CDA will also host an Anti-Gender-Based Violence talk to educate students and academics about abuse in its many forms. The session will be guided by a panel of academic experts in the field.