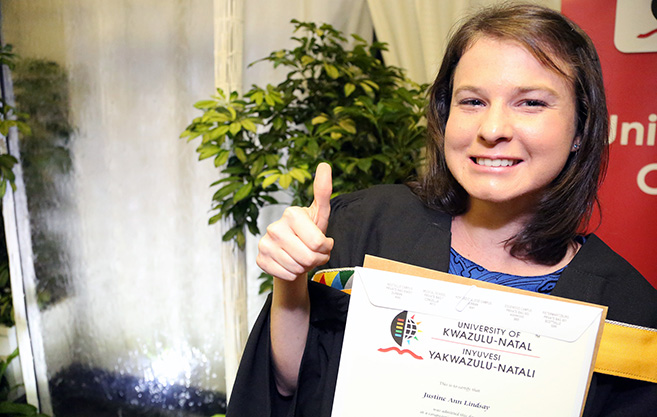 ITC, a standard-setting examination written after the completion of an accredited Certificate in the Theory of Accounting programme, needs to be completed on the journey towards becoming a charted accountant.

Lindsay, a Trainee Accountant at Deloitte’s Audit and Assurance Department, said passing the ITC with special honours was hopefully an indication of a successful future in accounting.

‘In order to qualify as a CA, I need to complete three years of SAICA accredited articles and write two board exams - ITC and APC. The ITC exam is done - I was one of six students to pass with honours - and I am currently completing my first year of articles at Deloitte, which I am enjoying and  plan to write the APC exam in November next year. I am uncertain whether I will study further after that, but if I do, I would like to start a Master of Commerce in Taxation,’ she said.

Remaining dedicated to beating the odds of a challenging academic career in accounting meant that Lindsay had to not only overcome the obstacles associated with her studies but life’s low blows as well when her mother passed away during her undergraduate studies.

‘My family has shown immense support during my studies. When my mother passed away, I made a promise that I would continue with my studies despite going through a difficult time. I received an overwhelming amount of support from my father (John) and fiancé (Timothy Freese) who both motivated me to carry on strong and this carried on into my honours studies. I believe they are proud of my achievements,’ she said.