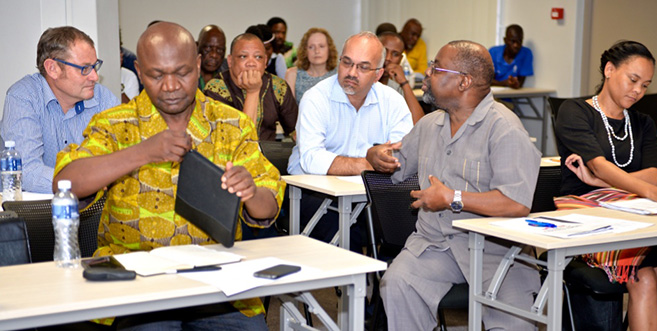 Delegates in conversation at the Traditional Medicine colloquium at UKZN’s Westville campus.

A colloquium on Epistemologies and Research Methodologies associated with Toxicity and Safety of Traditional Medicines was held on UKZN’s Westville campus.

The gathering was opened by the Deputy Vice-Chancellor and Head of the College of Health Sciences, Professor Rob Slotow, who emphasised UKZN’s commitment to the initiative and said the University was a ‘piece of the puzzle’, along with Government and other role players.

The event was co-hosted by the Department of Science and Technology (DST), the National Research Foundation (NRF), the Centre in Indigenous Knowledge Systems (CIKS), and the DST-NRF South African Research Chairs in Chemistry of Indigenous Medicinal Plants and Indigenous Healthcare Systems.

Academics and researchers from universities and research institutes across the country, professionals from modern and traditional medical practices and role players from the pharmaceutical industry gathered to discuss perspectives on toxicity and safety of traditional medicines in the drive for better public health care.

The Director of CIKS, Professor Hassan Kaya, provided background to the colloquium by emphasising the need to establish platforms for interaction between the different stakeholders of traditional medicine industry for better public healthcare. Kaya spoke about the varying approaches towards the knowledge and use of traditional medicinal material - while modern medicine focused on isolation and classification of pure active constituents in plants, traditional medicine was a combination of active compounds in plant extracts.

He also highlighted the significance of the complementarity of knowledge systems for the further development of traditional medicines.

The Chairman of the National Heritage Council, Professor Muxe Nkondo, reaffirmed the significance of the case study approach in analysing knowledge and power in the medical industry saying so called traditional medicines were not seen as a scientific fact but as projections of Eurocentric bias, as a justification for domination and the silencing of the African voice, and as a reflection of the complex interaction between Europe and Africa.

Masilompana said the existing regulatory frameworks, including the intellectual property rights (IPR) regimes, were inadequate to cater for the integrated nature of traditional medical practice.  He said THPs were willing to work in conjunction with traditional medicine researchers and pharmaceutical industry to improve healthcare in the country.

The Chair on Traditional and Alternative Medicine at the Public Health Association of South Africa (PHASA) and Executive Member of American Public Health Association (APHA) Committee on Alternative and Traditional Medicine, Professor Gail Hughes, focused on the use of case studies and case series as part of observational research methodology to facilitate hybrid/multidisciplinary understanding of TM use and practice.

She recommended that in order to move the traditional medicine industry forward for improved public healthcare, a synergistic collaboration with the pharmaceutical industry was required.  The areas of emphasis were the robust development of research with a focus on innovation, creativity, invention and discovery; and the training of the next generation of scientists, including the identification of hybrid models of engagement with the pharmaceutical industry.

Professor Josef de Beer of the University of the North West examined the role of Indigenous Knowledge in Science and Technology education, highlighting the potential of building capacity among science educators to strengthen understanding and performance in primary and secondary science, technology, engineering and mathematics (STEM) education.

Chief Director: Science Missions at the Department of Science and Technology, Professor Yonah Seleti, and Kaya outlined the way forward with Kaya strongly recommending constituting a team which would drive the process.

In his closing remarks, UKZN’s Deputy Vice-Chancellor: Research, Professor Jonathan Blackledge, supported the view that there was a need to increase capacity in natural products research. He thanked participants for contributing ‘in the interest of better public healthcare’.

Raylene Captain-Hasthibeer
In This Issue