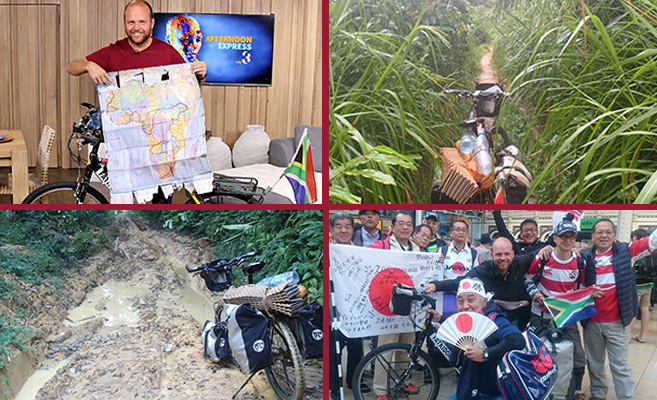 UKZN alumnus Mr Ron Rutland who cycled across two continents on a bicycle.

UKZN alumnus Mr Ron Rutland is back in South Africa after an epic journey from Cape Town to London on a bicycle!

Rutland, who visited 75 countries, cycled 43 000km in 840 days during which time he had dozens of punctures and met hundreds of ‘incredible people’.

Rutland, who holds a BCom degree from UKZN, had always wanted to explore Africa, a ‘great continent of adventure’, so after deciding to follow his dreams, he sat down with a map and plotted his trip using a black felt-tipped pen.

After countless visa applications and selling or giving away all his possessions, he enjoyed lots of farewell lunches with family and friends in Cape Town, putting on a significant amount of weight, hence the #FatKidOnABike tag. But on the journey from Cape Town to London, he lost a whopping 25kg!

He cycled through 45 countries in Africa and 30 in Europe, ending his trip at the infamous Springboks vs Japan game at the 2015 Rugby World Cup in Brighton, London.

‘There is no better way to explore than on a bicycle,’ he said. ‘It is simple and cheap and powered by the most efficient engine there is – the human body. It is almost silent, emits zero carbons, and doesn’t require fuel, tax discs, paper work, or space to park,’ said Rutland.

‘It’s the only vehicle that truly allows you to experience a place with all your raw senses. On a bicycle you can’t escape the sounds, the smells, the heat, the cold, the flies and mosquitoes, the dust, the mud, the mountain climbs and valley descents, the wind and the rain – that’s living, that’s experiencing.’

Rutland faced many challenges on his trip including overcoming language barriers, avoiding four countries due to Ebola, finding alternate routes because of war, more than 48 °C of sweltering heat, and his tent burning down soon after he set off on the epic journey.

He also experienced a generosity of spirit throughout the trip, with strangers offering him water, food and a place to pitch his tent. One of the most memorable moments was when he thought a soldier was asking for a bribe, but was actually giving him money to buy something to drink!

He dedicated the journey, known as ‘Lettie’s Ride’, to a dear friend, Nix ‘Lettie’ Haynes who died from cancer while he was on the trip.

Rutland paid tribute to all those who supported him on his journey, including Big Eye Branding (which has just launched in SA) ABSA and DHL, among others.

To find out more about Rutland’s adventures, visit http://fatkidonabike.com/