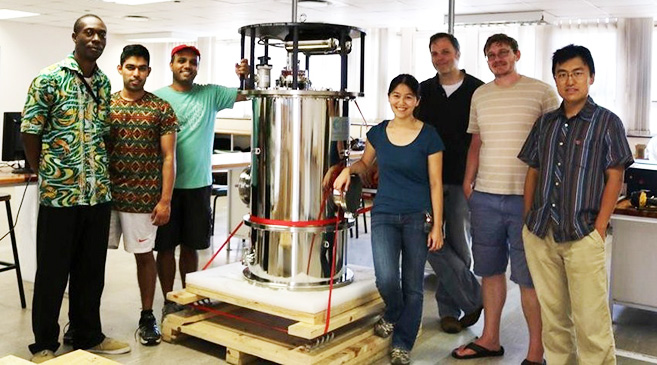 Members of the Astrophysics and Cosmology Research Unit with the cryostat.

The pulse-tube cooled cryostat will be used as a reconfigurable, low-temperature test bed for developing instrumentation subsystems for microwave and radio telescopes.  The project is headed by Senior Lecturer and Astrophysicist, Dr Cynthia Chiang of the School of Mathematics, Statistics and Computer Science, who is excited about the new arrival.

‘The cryostat is essentially a fancy refrigerator,’ Chiang explained.  ‘The device provides a test volume that is held under vacuum and that is cooled to 4 K with a pulse-tube mechanical refrigerator.’

The full test bed system will eventually house a helium sorption refrigerator - currently on order and scheduled to arrive later this year - that will allow cooling to sub-Kelvin temperatures.  ‘I think this might just be the coldest temperature on campus!’ quipped Chiang.

The cryostat was manufactured by High Precision Devices and was funded by an NRF National Equipment Programme grant valued at about R5 million.  When the test bed is fully operational, the research group will use it to develop hardware for SPIDER, an international experiment based in Antarctica that studies the earliest moments of the universe’s creation.

Last year, the project launched six telescopes into the stratosphere with a giant helium-filled balloon (roughly the size of Durban’s Kings Park Stadium) to observe the leftover heat from the Big Bang.