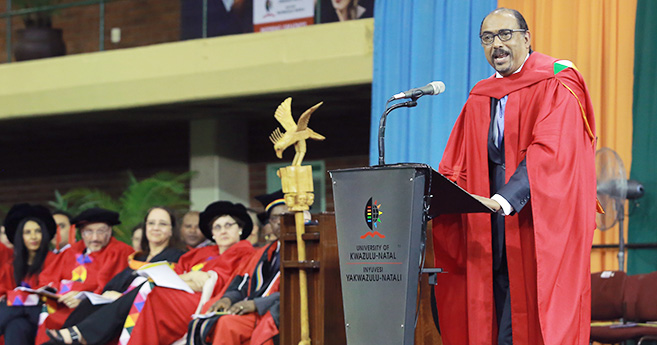 The Executive Director of UNAIDS (the Joint United Nations Programme on HIV and AIDS), Dr Michel Sidibé, received an honorary Doctor of Administration degree from UKZN for his contribution in the fight against AIDS.

Sidibé said UKZN is the first university in Africa to honour him with an honorary degree.

In his acceptance address, Sidibé told graduates they were beginning their ‘careers at a historic moment when the world has committed to the most ambitious development agenda of all time - the Sustainable Development Goals.

‘Africa will be at the centre of this transformation, and you will lead it, you will be the “entrepreneurs” of a new era of sustainable human development and your energy, innovation, and optimism are the keys to unlock global and national transformation,’ said Sidibé.

He also encouraged the private sector to step up and join the fight for Universal Health Care. ‘We are counting on you, the next generation of business leaders to help us scale up our work to help people, capturing innovation at every level.’

Sidibé’s vision of three zeros - a world with zero new HIV infections, zero discrimination and zero AIDS-related deaths - has been echoed around the world. His passionate advocacy has contributed significantly to the unprecedented global political commitment and funding for HIV and AIDS.

The Malian-born campaigner has also been at the forefront of the global campaign to eliminate mother-to-child transmission of HIV, and to eliminate HIV infections among children.

Sidibé’s global advocacy has helped firmly secure the fight against HIV and AIDS at the top of political agendas, including those in South Africa, and has played a key role in supporting South Africa’s HIV and AIDS plans alongside its respective programmes through his personal advocacy and guidance.

He has provided support to South Africa through his regular meetings with the President, Minister of Finance and Minister of Health to facilitate high level consultations with opinion-makers and international organisations.

‘South Africa is leading the way in ensuring that all countries have access to affordable generic drugs.’

Under Sidibé’s leadership, UNAIDS works to ensure that no-one is left behind in the response to HIV and that everyone in need has access to lifesaving HIV treatment and prevention services, especially the marginalised and neglected.