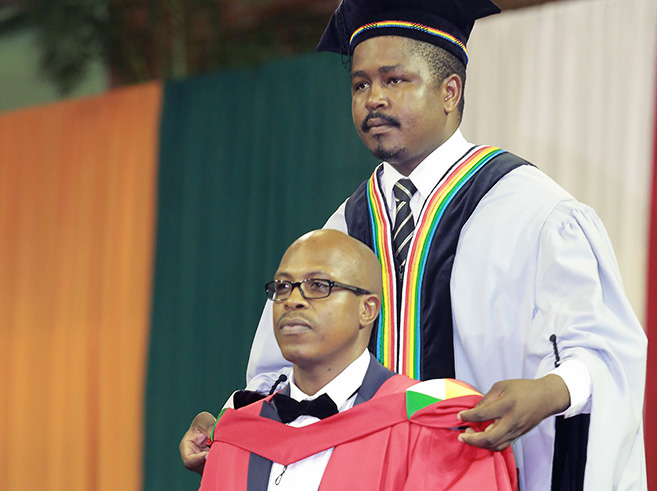 The representation and participation of women in decision making processes in municipalities in the Eastern Cape and KwaZulu-Natal was central to PhD graduate Dr Kwazi Majola’s research.

‘The reason for this is that women seem to be the most marginalised people yet they far outnumber their male counterparts in South Africa. They remain the poorest of the poor as they have been negatively affected by culture, family and opportunities for education,’ said Majola.

Majola further explains that while the country’s laws encourage women to participate equally in all structures, achieving this remains a challenge.

‘The challenge is that political parties and municipalities are not doing enough to recruit, groom, and train or empower women to participate in politics at the local government level. Women may be deprived of enjoying this political right when there is no investment on gender issues,’ said Majola.

‘The study reminds political parties, community members and municipalities about the importance of the representation and participation of women at local government level. When women are empowered, community members will not have a problem in electing women as ward councillors in their areas,’ he added.

Having the opportunity to travel to Canada and Tanzania while doing his PhD was a valuable learning experience for Majola.

‘My supervisor, Professor Thokozani Nzimakwe, organised funding for me to go to Tanzania and gave me an instruction to come back when I finished a chapter. I also visited the University of Dar es Salaam on a NRF grant for collaboration purposes in 2015. I call this PhD Tanzania because I worked hard while I was there and I would not have finished this degree if I did not get that opportunity,’ said Majola.