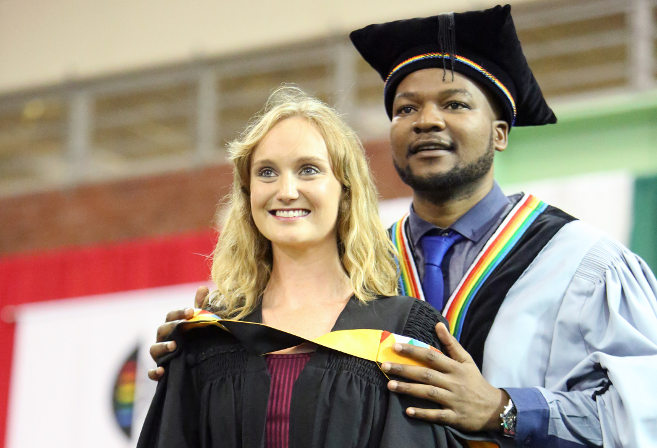 Ms Andrea Mellon’s passion to contribute to the fight against human trafficking led her to pursue a Masters in Law degree with the aim of broadening her understanding of the human trafficking industry and the roles and responsibilities of both the State and Non-Government Organisations in human rights protection.

‘Human trafficking has been something I’ve often thought deeply about,’ said Mellon. ‘I’ve also often thought of how people are so quick to blame government, and find every reason to oppose any kind of unity between role players. This degree allowed me to explore what the law says about the relationship between these role players. Is it one of rivalry or can they see each other as true partners in tackling social issues, and whether there are any shortfalls that need addressing that I could raise in contribution to the fight against human trafficking,’ said Mellon.

The title of Mellon’s thesis was: “Legislation Regarding the Role of the State and NGOs in Addressing Trafficking in Persons: A focus on Sexual Exploitation in South Africa and Brazil”.

Her studies were not without incident. ‘Having lost all my research and backed up information in a car theft, it was a struggle to have to start from scratch. But with the help of my supervisors, friends and family, as well as the motivation that I still had a voice that I needed to use for the enslaved voiceless, I was able to reconstruct the backbone of research and face the rest of it with a renewed energy,’ said Mellon.

As part of her research interest, Mellon presented a paper titled: “The Obligations of the State and NGOs in addressing Trafficking in Persons: An Analysis of the Legal Frameworks of South Africa, Brazil and Canada”, at the Fifth International Human Rights Education Conference in 2014.

In her position as a candidate attorney at the law firm Livingston Leandy, Mellon will continue to use her legal expertise to promote and bring about social justice.