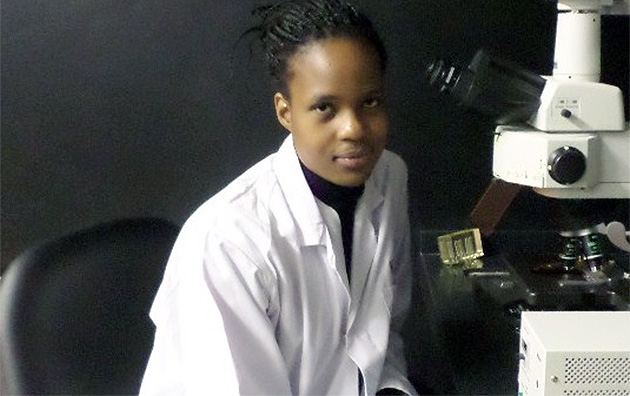 UKZN Medical Biochemistry student, Ms Refilwe Molatlhegi, has successfully synthesised and tested the anticancer properties of the novel compound known as carbazole in her Masters project.

Molatlhegi said carbazoles and their derivatives had been reported to have anticancer properties and her research entailed synthesizing the novel carbazole compound to test its efficacy in killing of lung cancer cells.

Aware that cancer had become the second leading disease in the world after cardiovascular diseases, with lung cancer as the main cause of cancer-related deaths, Molatlhegi’s study was titled: “Antiproliferative Effect of a Novel Synthesized Carbazole Compound on A549 Lung Cancer Cell Line”.

She said it was alarming that most of the global cancer cases were reported in developing countries, such as South Africa.

The survival rate of lung cancer patients undergoing surgery was also poor, said Molatlhegi, and subsequently there were no effective drugs for treatment of the condition.

Presenting her study at a College of Health Sciences Research Symposium, Molatlhegi said there was therefore a need for development of more potent and specific anti-lung cancer drugs.

‘The results of this study demonstrated that the cytotoxic properties of this novel synthesized compound could possibly be associated with its ability to down regulate the expression of antioxidant defence proteins (Nrf2 and SOD) and Hsp70 thus activating ROS overproduction.

‘This was an in vitro work, therefore more work still needs to be done in order for us to authenticate the cytotoxic pathway of this novel carbazole compound on A549 lung cancer cells before it can be tested in the animal models of lung cancer and then clinical trials.’

Molatlhegi obtained a Bachelor of Science degree in Microbiology and Biochemistry in 2012 and graduated with an Honours in Biotechnology from Rhodes University in 2013.

She said the research project was in collaboration with Professor Robert Gengan and Dr Krishnan Anand from the Durban University of Technology’s Department of Chemistry who were responsible for the synthesis of the novel carbazole compound.

‘Developing countries such as South Africa have high cases of HIV, TB, cancer and malaria, which continue to affect the socioeconomic state of our country. As a result South Africa needs young ambitious people working on cutting-edge biomedical science, technology and innovation research to develop early diagnostics and treatment.’

Molatlhegi said it was exciting to conduct research where the ultimate goal was to help people; in this case those affected by lung cancer.

‘The results of the study have the potential to be quickly translated from the laboratory bench to the patient bedside treatment for lung cancer. This makes me passionate about my research, knowing that the findings are somehow contributing to medical research in addition to actively joining other scientists worldwide in developing technological entities to cure these diseases.’

Molatlhegi said she hoped to devise novel techniques, compounds and interventions that would help to control some of the diseases burdening the country.