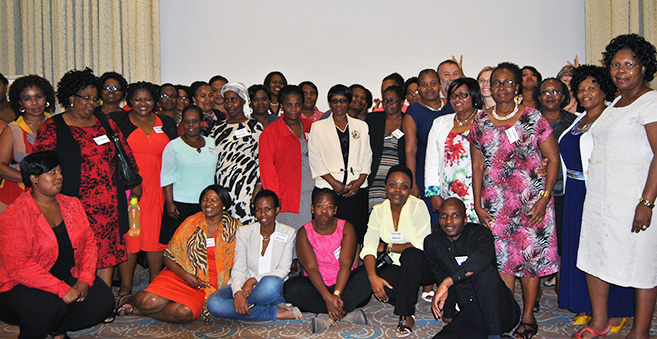 Health professionals at the 20 000+ Partnership meeting.

20 000+ Partnership has Achieved its Goal

The close-out meeting of the 20 000+ Partnership project was held recently in the knowledge that its founding goal declared seven years ago had been achieved!

The project took its name from the assertion that if the prevention of the mother-to-child transmission of HIV programme was run effectively, 20 000 children a year in KwaZulu-Natal would be saved from being infected by HIV.

On presenting the background to the project, Mrs Zama Luvuno, formerly of 20 000+ and now with KwaZulu-Natal Department of Health (DoH), said the partnership which comprises UKZN, KwaZulu-Natal DoH and the Institute for Health Care Improvement (IHI) was awarded a five-year grant by the Centre for Disease Control.

The PEPFAR funded 20 000+ Partnership was a health systems strengthening project aimed at improving the quality of prevention of mother-to-child transmission (PMCTC) services in public health facilities in three KwaZulu-Natal districts.

Luvano said: ‘The programme provided support and mentorship to the eThekwini, Ugu and Umgungundlovu districts with the aim of significantly reducing perinatal HIV transmission within two years and improving overall child survival within five years.’

‘At the time there was a gap in the performance of the PMTCT programme. Perinatal HIV was high at 20% despite existing programmes,’ said Luvuno. ‘20 000+ introduced a quality improvement methodology that made sure that the service delivery was reached by all targeted groups,’ she added.

Dr Wendy Maphatswe-Dhlomo, who outlined the successes of the project over the period of its work, said significant decreases in perinatal infections were noted as well as improved uptake of HIV counselling, retention in care of HIV positive mothers and follow-up of babies. This was also in the context of a number of health systems changes – such as nurse-initiation of anti-retroviral medication and changes in the ART guidelines.

Mrs Lindiwe Ngwenya shared the eThekwini district’s experience with the meeting. ‘After being engaged with 20 000+, we saw the improvement in meetings, challenges were identified and strategies devised. We learned a lot about collecting accurate data and information and doing presentations armed with that knowledge.’

Ngwenya said she also learned a lot on quality improvement training through the project. ‘Working as a team with districts, sub-districts and level facilities provided us with much needed skills.’

‘The project helped strengthen communication between the district and its seven sub-districts,’ said Mrs Thuli Tembe of the Umgungundlovu district. ‘The project helped strengthen ties with feeder clinics and mother hospitals. It promoted a team approach into solving problems since we are all working to towards achieving the same goal. We have also noticed an increase in service delivery.’

Mrs Mpume Shibe, PMTCT Co-ordinator in Ugu district, said the programme taught them the importance of work and accountability, ‘Ugu noticed a big change in their work since 20 000+. We won awards, including the Impumelelo award, and linked community health care givers to strengthen service delivery. We really appreciate 20 000+. Masibavikele Campaigns also helped a lot in the reduction of maternal deaths.’

Charting the way forward, Dr Bernhard Gaede indicated that the partnership had since been incorporated in the Centre for Rural Health (CRH) at UKZN as a strategic partner in advancing health systems innovation and quality improvement. As part of the strategic vision of the CRH, health systems innovation and quality improvement were key to responding to the priority needs of the KwaZulu-Natal Department of Health.’