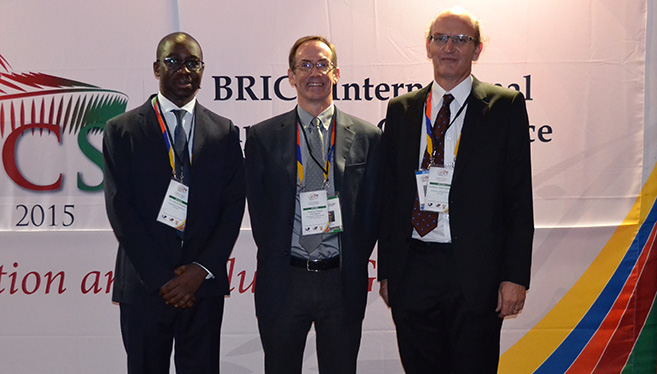 UKZN co-hosts Workshop with the Competition Commission and CRESSE

On the 10th of November the workshop Lectures on Competition Policy was co-hosted by the Competition Commission, the Athens-based research network CRESSE and the University of KwaZulu-Natal.

The sequence of events drew to Durban an impressive representation of the national and international policymaking and academic communities in the competition field.  A number of UKZN graduates who now work in the sector also returned to the city.

The workshop was composed of presentations by six of the top international experts in the economics of competition policy - William Kovacic, Joseph Harrington, Tom Ross, Jorge Padilla, Frederic Jenny and Yannis Katsoulacos.  Contemporary developments were reviewed in each of the key areas of policy such as cartels, horizontal mergers, exclusionary conduct and policy enforcement.

The Competition Commission’s Chief Economist and UKZN Alumnus Dr Liberty Mncube and School of Accounting, Economics and Finance academic Professor Jim Fairburn stressed the importance of a partnership between practitioners and academics for the advancement of competition policy internationally.  They were delighted to host so many of the leading contributors to the field and felt that the quality of contributions was outstanding.

Oyatade said she gained a wealth of valuable knowledge from the workshop which will benefit the development of her dissertation.

‘The presentations have given me new perspectives on how I can interpret my statistical data which will be very useful for my research. As BRICS is a group of countries coming together to promote investments amongst them as partners, so there are a lot of interesting things to learn,’ she said.