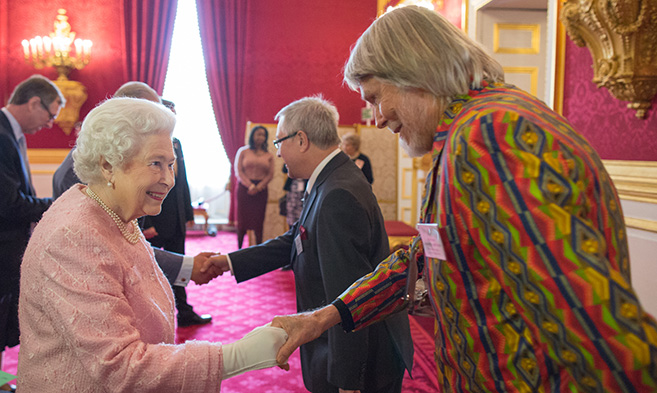 Professor David McQuoid-Mason of UKZN’s School of Law wowed the Queen of England with his colourful “Mandela jacket” when he met her in London.

McQuoid-Mason met and shook hands with the Queen at a Reception for Heads of Commonwealth Organisations held at St James Palace prior to the Commonwealth Heads of Government Meeting (CHOGM) in Malta.

The function was hosted by the Queen to thank Commonwealth organisations for supporting her and the Commonwealth.

McQuoid-Mason was invited to the Reception in his capacity as President of the Commonwealth Legal Education Association (CLEA) which represents more than 2 000 Law Schools around the Commonwealth. (The Law School at UKZN hosted the CLEA Conference in 2013.)

For the regal occasion, McQuoid-Mason wore what he calls his “Mandela jacket”, designed by Lindiwe Khuzwayo of Durban, which was in colourful contrast to the dark suits worn by other men at the function.

He mentioned to the Queen that he was wearing the garment in honour of President Nelson Mandela, whose son had been a student of his at UKZN.

The Queen remarked that it was ‘very colourful’ and chatted again to McQuoid-Mason shortly before leaving the reception room where Prince Charles was at the Queen’s side to welcome guests.

McQuoid-Mason used the opportunity to mention to Prince Charles that his (Charles’s) grandfather, Lord Louis Mountbatten, who was Admiral of the Fleet, and McQuoid-Mason’s Irish-Jamaican grandfather, who was a Captain in the Royal Navy, had once played polo together in Malta.

In his ‘Thank You’ note to the Queen, McQuoid-Mason gave her a short description of CLEA’s activities and mentioned that her father, King George VI, had probably saved his father’s life during World War 2 by inviting him to Buckingham Palace to receive his Distinguished Service Cross (DSC) for bravery at the time that McQuoid-Mason’s father’s motor gun boat was blown up by a mine off Norway killing all but two of the crew.