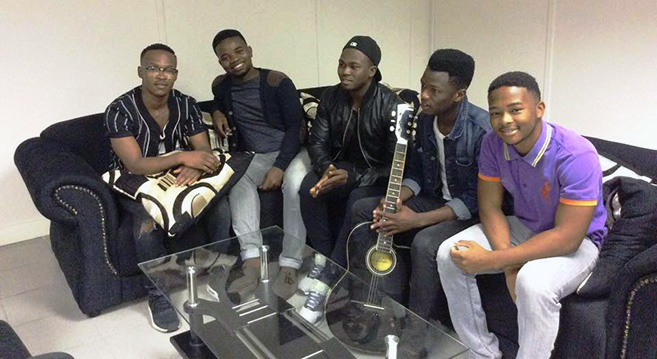 TAP Gents - The Inside Story of their Musical Journey

In 2014, a group of young students met at UKZN’s Howard College campus and formed the Afro Pop group, TAP Gents.

Since then they have developed a following at the University and often perform at Howard College, treating their fans to Afro Pop plus a bit of Gospel music. While the five members are all students, their first love is music.

‘We want to inspire the youth of South Africa with our music. For many of us, music is a career, and we would love to uplift our families and communities with our music,’ said Philani Thabethe.

A singer, dancer and actor, Thabethe, from Mbazwana in Zululand, performed with the Star Choir in Europe from 2010 until 2013.

The second-year UKZN Music and Drama student got involved in art while at high school, where he met another band member, Phakamani Nxumalo.

Nxumalo, also from Mbazwana, is doing IT Management at Rosebank College’s Durban campus. His love for music was sparked when he sang in his primary school choir. He has performed with the community choir, Mbazwana New Generation, and Star for Life who he toured with in Sweden, France, Denmark and Italy last year.

Another group member, Hilton Ngubo of Inanda, started singing in church and became a member of the Inanda Mass Choir while in high school. The third-year UKZN Bachelor of Arts student, who is majoring in Psychology, has performed all over the country including Gauteng, Cape Town and Bloemfontein.

The fourth member of TAP Gents is Ayanda Dlamini of Umlazi who played soccer for Ajax Cape Town FC, but his love for music eventually drew him to register for a degree in African Music and Dance at UKZN. Dlamini has performed in the United States, France and Germany as a member of Thokoza Choir.

The fifth member, Treasure Mtetwa, is from KwaMashu and his love for music also started while he was at school. He has performed with the DUT Choir and South African Singers in Dubai and in the United States.

Mtetwa met the other members of the group after registering at UKZN last year.

The group’s name was created out of the first letters of the names Treasure, Ayanda and Philani – the founding members of the group. Ngubo and Nxumalo joined after a few performances but they stuck with the original name as they had already started building their brand, and ‘it sounded good’.

‘Our thanks go to our families who support our vision, but mostly to God who blessed us with our voices - we couldn’t be more grateful,’ they said.