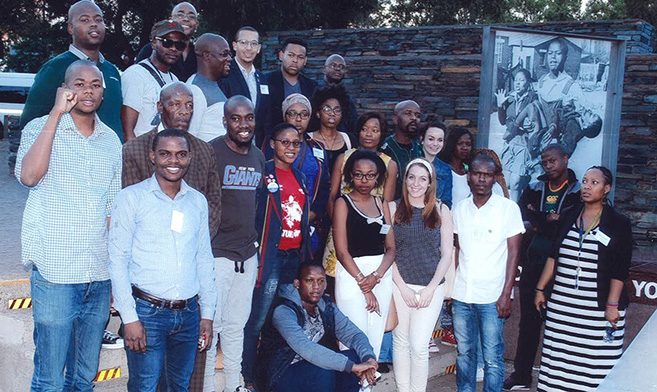 Student leaders at the Race and Transformation Dialogue in Johannesburg.

Two UKZN students, Mr Lukhona Mnguni and Mr Jonathan Brady of the College of Humanities, attended a three-day event in Johannesburg at which race and transformation were under the spotlight.

Sponsored and arranged by the Wits Centre for Diversity, the Nelson Mandela Foundation, the Ahmed Kathrada Foundation, the Anti-Racism Network and numerous other organisations, the event included intense discussions as well as trips to the Nelson Mandela Foundation, Wits University, and the Hector Pieterson Memorial where senior figures in academia, activism, media and business engaged with students on broad issues regarding race and transformation in Higher Education and in the country in general.

Both Mnguni and Brady were nominated by UKZN to attend the event.

Mnguni is a former recipient of the Distinguished Student award and is well known for his social commentary and community engagement. He has recently completed his Masters in Africa and International Development at the University of Edinburgh, Scotland on a Commonwealth Scholarship.

He is currently working as a PhD-intern researcher at the Maurice Webb Race Relations Unit.

Brady, the current President of the UKZN Chapter of the United Nations Association of South Africa (UNASA), is registered for a Master’s degree in Population Studies. He was contracted by the Corporate Relations Division of the University to transcribe recent discussions for transformation dialogues held at four of UKZN’s campuses.

Both students said it had been a very memorable experience. ‘I was enthusiastically impressed by the level of engagement and commitment to scholarship by students,’ said Mnguni.