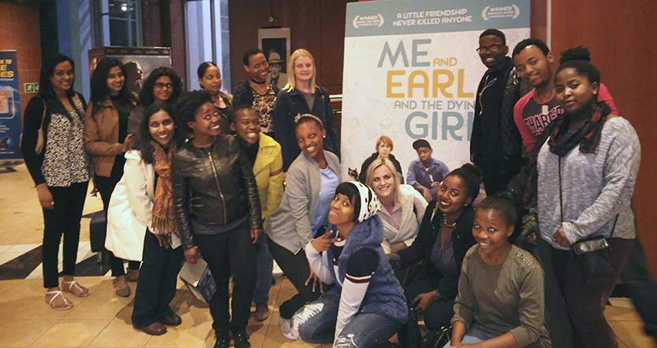 Dr Subeshini Moodley and UKZN students at the pre-release screening of the film: Me, Earl and the Dying Girl.

Fifty media students from UKZN’s Pietermaritzburg campus attended a pre-release screening of the award-winning movie: Me, Earl and the Dying Girl, at Gateway’s Cinema Nouveau theatre.

The invitation was extended to the Media Department by Ms Puleng Moloi, UKZN alumnus and Publicity Manager at Times Media Films, a division of the Times Media group.

The film, which won both the Grand Jury Prize and Audience Award at the 2015 Sundance Film Festival, is a moving story about friendship and loss.

The media students said they appreciated being able to apply what they had learned in class when reviewing the film. They identified with the expressive and experimental cinematography explored in the film, and the new ways of telling stories with old themes such as that of loss, terminal illness and friendships.

They also enjoyed the intertextual references made about films that they had either studied or heard about in their film modules.

A highlight of the fun evening was getting complimentary popcorn and Coke!