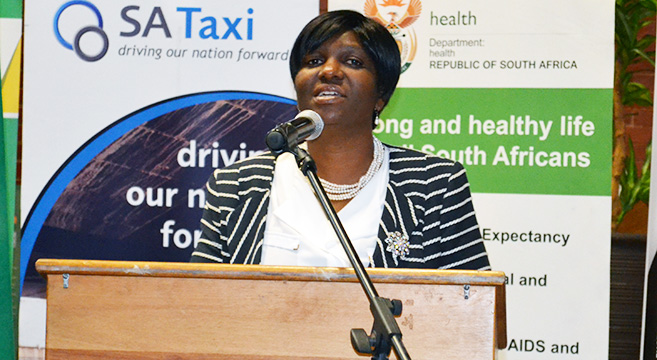 Despite extensive efforts by the South African health system and non-governmental organisations to promote safe sex, condom use by drivers in the minibus taxi industry, as a workplace, remains low.

This is according to a UKZN study which found that multiple sexual partners were relatively common among minibus taxi drivers, thus increasing the likelihood of them transmitting HIV and other sexually transmitted infections to their partners.

UKZN’s Nursing Academic Leader, Professor Gugu Mchunu, presented the findings of the research project titled: “A Rapid Assessment of HIV/AIDS in the Minibus Taxi Industry in KwaZulu-Natal” at a colloquium on HIV in the taxi industry which was part of the build-up to the launch of a private sector taxi industry HIV Counselling and Testing (HCT) campaign.

The colloquium was organised by UKZN’s Nursing Discipline in collaboration with the South African National AIDS Council (SANAC).

The study, which Mchunu co-authored with the Dean and Head of School, Nursing and Public Health, Professor Busisiwe Ncama, and a Lecturer in the Nursing Discipline, Dr Joanne Naidoo,  explores the level of knowledge, beliefs and practices regarding HIV infection and AIDS among minibus taxi drivers.

This study, which viewed mini bus taxis as a workplace, aimed to devise recommendations on supportive and effective HIV/AIDS interventions and policy for management of wellness programmes within the minibus taxi industry.

Mchunu, who specialises in health promotion in the workplace, and Ncama and Naidoo, whose research is on HIV/AIDS, collaborated to tackle the issue of HIV/AIDS among taxi drivers. Their concern was that there is a dearth of published literature focusing on quantified estimates of prevalence, incidence, the business impact and response to HIV in this sector.

The main recommendation of the study was that steps needed to be taken to educate this occupational group in order to enforce safe sexual behaviours. ‘Relevant policies need to be put in place to address the drivers’ health needs,’ said Mchunu.

The colloquium was attended by various stakeholders including representatives from the National and Provincial Departments of Health; the KZN Department of Transport; SANTACO – which is one of the biggest national taxi associations; SA Taxi Finance; the International Labour Organisation (ILO) and Toyota.

It was highlighted at the launch that major taxi ranks across the country would soon have healthcare facilities on site as recommended in the findings of this study.

The KwaZulu-Natal Department of Health has already started a mobile-clinic project in 19 KwaZulu-Natal taxi ranks and there are plans to roll it out to other provinces, giving drivers and passengers access to free testing for HIV and other illnesses.

‘We have a higher burden of disease, especially HIV and TB. We are very excited about this initiative because it’s adding value and enhancing our plans of reaching out to as many South Africans as possible,’ said Dhlomo.