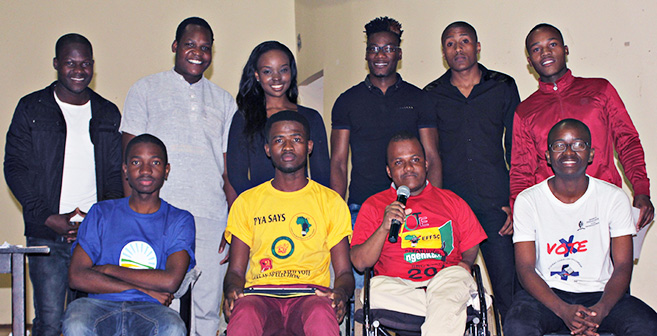 Students from the School of Social Sciences, who are part of the Society of Political Science Students (SOPPS), hosted a successful debate at the Howard College Theatre in the run up to the Student Representative Council (SRC) elections.

Acknowledging the spirit of democracy in advancing mutual professionalism and respect for effective representation, President of SOPPS, Mr Obadiah Moyo, said the elections were important for student leadership and governance with the debate affording students the opportunity to listen and deliberate with each other.

Speaking at the event, Moyo added: ‘In SOPSS we believe in building strong minds to ensure a great future - we acknowledge we are all here to inspire leadership qualities.

‘This is not a competition looking for winners and losers but a platform to allow these organisations to present their manifestos in a much broader way, thereby solving the problem of trying to incorporate all their views on a single poster.

‘Over the years, we have never had a platform like this but we hope to create a new democratic culture, where every year students will be given a chance to listen to an organisation’s views on how they are going to represent students,’ he said.

The SRC candidates presented their manifestos to the students with Mr Sizwe Msweli of the Democratic Alliance Student Organisation pointing out the importance of free and secure education; equal opportunity; transparency, and accountability within the SRC.

‘Students should not feel intimidated by other students who do not support the DA. The DA also wants to ensure that students have 24-hour access to the library during the semester especially during the examination period. Most importantly, we want free education for all throughout South Africa,’ said Msweli.

Nation NASMO candidate, Mr Sithelo Magagula, outlined their understanding of leadership, and expressed concern about the misuse of assets and resources for personal gain. Magagula further indicated that the SRC needed to report back to the students.

South African Student Congress (SASCO) candidate Mr Bandile Majola outlined SASCO successes including assisting more than 1 000 students who were financially excluded and the revival of some of the sporting facilities at the University.

As a student from the Disability Unit, Mr Mthobeli Christopher Cutama of the EFF, felt the onus was upon him to address and push forward the concerns of students living with disabilities while working towards free education throughout South Africa.

The event was well attended by students who posed questions to the candidates. SOPSS hopes to stage the SRC Debate platform every year on all campuses.