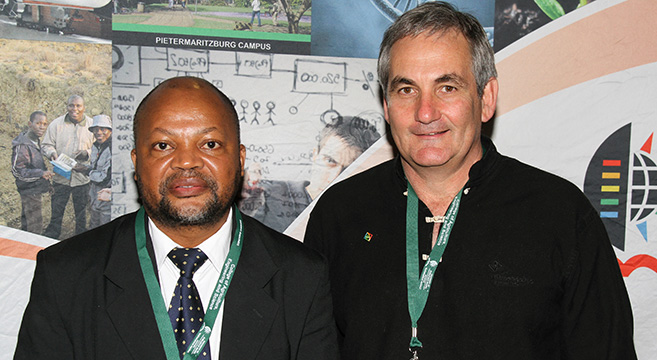 UKZN’s School of Life Sciences held a special breakfast in honour of its stakeholders under the theme: “Optimising Business Synergies”.

UKZN staff and industrial and research partners attended the function at Durban’s International Convention Centre which aimed to foster partnerships and collaboration.

Welcoming guests, Deputy Vice-Chancellor for the College of Agriculture, Engineering and Science, Professor Deo Jaganyi, said the event had been organised to acknowledge the important role external partners ‘play in our business of teaching, research and community engagement’.

Dean and Head of School, Professor Sam Mukaratirwa, reinforced this saying: ‘As the School of Life Sciences we are mandated to produce graduates who are fit for purpose to various stakeholders. We need to show relevance to society by what we do either individually or as a collective.

‘It is indisputable that the School of Life Science’s ability to execute its mandate is inextricably linked to its relationship with its stakeholders.  The partnership with you, our valued stakeholders, has made it possible for us to achieve our goals and in most instances surpass our targets.

‘No organisation can stand on its own like an island,’ said Mukaratirwa.  ‘Our very existence as a School depends on your support and I am greatly humbled by your unwavering support as we seek ways to enhance our relationships for mutual benefit.’

Academic Leader for Teaching and Learning, Professor Ade Olaniran, updated guests on the status quo of the School’s teaching and learning activities, and the programmes offered in the School at undergraduate and honours level.

Olaniran highlighted two new offerings for 2016 - the reinstatement of qualifications in Grassland Science and the introduction of a BSc Honours in Forensic Genetics.  ‘This honours programme is designed to address the serious shortage of Forensic Scientists in South Africa,’ said Olaniran.  ‘It is aimed at developing capacity in Forensic Genetics through the training of Forensic Practitioners competent in DNA profiling.’

Academic Leader for Research, Dr Shahidul Islam, pinpointed the School’s research focus areas, namely, biotechnology (biochemistry, genetics and microbiology), and biology (biodiversity, evolutionary biology and cellular biology).  He said that the School had more than 60 full time academics and about 100 honorary academics and research fellows.   About 75% of permanent academics within the School were NRF-rated.

Islam stressed the prominent position the School of Life Sciences enjoyed in terms of research productivity.  ‘In 2015 we secured the positions of two SARChI Chairs, and six Top 30, 19 Prolific and seven Emerging Researcher places at UKZN,’ he said.

‘In 2014, the School graduated 73 masters and PhD students, up from 48 the previous year.  You are our key stakeholders and you can support us to go higher and higher.’

The morning ended with an insightful presentation by guest speaker, iSimangaliso Wetland Park CEO, Mr Andrew Zaloumis, who provided an interesting overview of the formation, preservation, consolidation and growth of the iSimangaliso Wetland Park, which was proclaimed a World Heritage Site in 1999 owing to its biological diversity and superlative natural phenomena.

With the Park situated in the heart of an historically disadvantaged area, Zaloumis spoke of ‘poverty amidst plenty’ and of the need to shift the development trajectory – the delicate yet essential balance that needed to be created between conservation and community upliftment and the necessity of creating synergies between the two.

In preserving the Park, the adjacent community needed to be uplifted at the same time.  Neither could happen without the other.

In terms of the park’s research strategy, ‘iSimangaliso commissions research to make decisions that are based on sound, evidence-based science.  Research proposals considered include those that contribute towards assisting and supporting management decisions, knowledge creation and academic excellence, and transformation.’

Currently iSimangaliso Wetland Park has 120 registered research projects.  Zaloumis said the park provided a fantastic platform for teaching and research, and that there was a long history of co-operation with UKZN in this regard.

He also mentioned the organisation’s flagship Higher Education access project which had enabled 67 local community members to gain access to local Higher Education Institutions such as UKZN with a 95% pass rate.