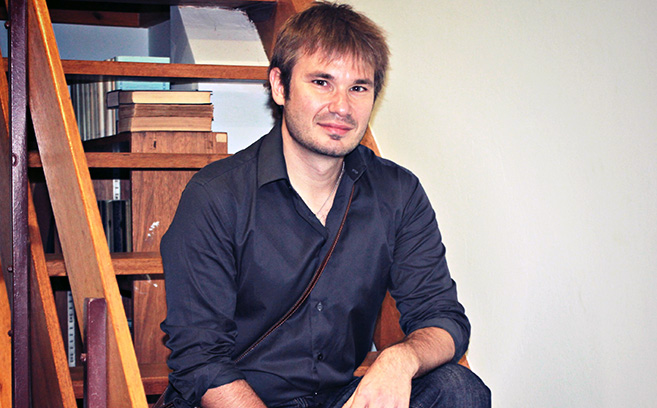 The Classics Programme within the School of Religion, Philosophy and Classics (SRPC) recently welcomed a new postdoctoral student, Dr Luca Sansone di Campobianco from the University of Bologna in Italy, under the supervision of Dr Elke Steinmeyer.

Luca chose to pursue his postdoctoral degree at UKZN after attending the biennial meeting of the Classical Association of South Africa. ‘I was impressed with the energy, liveliness and commitment of the UKZN young classics postgraduate community. The memory and my impressions of the Department led me to contact Dr Steinmeyer. I wished to be part of that energy, and contribute to its growth,’ he said.

Luca is scheduled to be at UKZN for a one year tenure, and spoke about his experiences thus far, ‘The staff as a collective taught me that numbers might not be everything. The Department is admittedly small: three full time lecturers, two postdocs such as myself and several postgraduate students who are proving themselves rather generous of their time.’

‘Regardless of these numbers, the Department is still able to offer an impressive variety of courses (Greek and Latin language and literature, Egyptian culture, Classic Civilisation and so on) while catering to a pool of about 300 students or more. I would say this is entirely out of goodwill and genuine care.’

His research will focus on Begriffsgeschichte which means Conceptual History in German. In short, it is the study of the rise and development of concepts that would exercise a substantial impact on societies, and the study of how these concepts have been expressed through the synergy of different systems of signs.

‘I was interested in seeing how meaningful concepts would affect the individual and the group in ancient societies, and compare their influence in our contemporary times. There are of course differences, yet I was delighted to see how similar we are, regardless of the time and space that separates us,’ said Luca.

His supervisor Dr Elke Steinmeyer further added, ‘I am very happy that Luca has joined the Classics Programme. I am sure that the staff members and the postgraduate students in particular will greatly benefit from his expertise and his research interests. Luca has received very positive feedback from the students for his lecturing in our first-year Classical Civilisation course. I would like to thank the Deputy Vice-Chancellor and Head of College, Professor Cheryl Potgieter for having supported his scholarship.’

Asked about his future plans, Luca said: ‘I would like to remain in South Africa. During my three years, I have created emotional ties within this country. Here, I have found friends and colleagues I could consider family. SA is a rather complex and sometimes challenging country, yet uniquely beautiful and full of character.’

‘For the past five years I have been working in different academic environments, and while I am thankful for the experience I have gained, I now wish to find myself a home and give back as much as I was given, developing a path that would be beneficial to my study and my personal and professional development.’