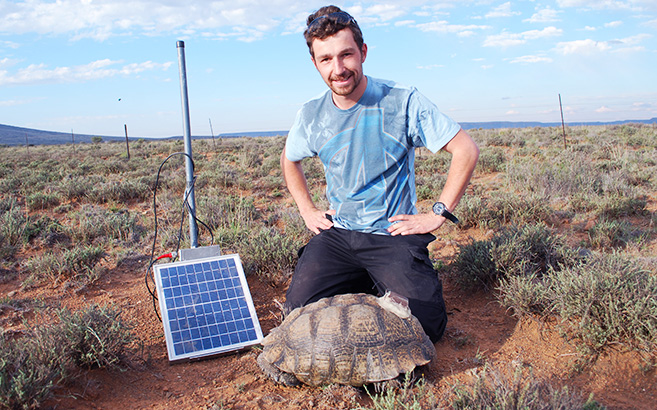 Masters Student Hot on the Trail of Leopard Tortoises

Research by master’s student in the School of Life Sciences, Mr Martyn Drabik-Hamshare, on the home range and movement of threatened Leopard Tortoises (Stigmochelys pardalis) in the Western Cape led him on an adventurous search during his most recent data-collecting venture.

Drabik-Hamshare’s research is significant since much of the tortoises’ historical habitat is now used by humans for farming, leading to habitat loss and threatening their survival. In addition, roads and fencing divide their habitats, and electric fencing can decimate populations.

He returns to the five commercial farms where the tortoises roam every two to three months to download data collected by GPS transmitters placed on the tortoises. On his three visits this year, eight of the tortoises were easy to find, however two proved elusive.

Losing two of the subjects of his research would mean a considerable loss of time, energy, finance and effort. After hours of driving around the sites, one tortoise was found by chance.

The second tortoise remained evasive, resulting in Drabik-Hamshare asking Chief Flying Instructor Mr Ronny Johnson from the international flying school in Beaufort West to assist with the search. This was at the suggestion of Mr Victor Hugo of animaltrackem, who provided the transmitters for the study.

A weak signal was received after an hour of flying over the area and Hugo suggested that Drabik-Hamshare download only the last known GPS point from the transmitter using the weak signal.

So Drabik-Hamshare headed out with Johnson to try again and following another hour of fruitless searching, and just as the plane turned to head home, Drabik-Hamshare got a message from the transmitter with the GPS co-ordinates.

After an hour’s drive and a search on foot the tortoise could still not be found, but eventually, to the immense relief of Drabik-Hamshare, the tortoise was located, alive and well - nine months of vital data were then downloaded!

So far, Drabik-Hamshare has established that Leopard Tortoises seem to be moving much further than expected with some covering up to 3km in just two or three weeks. Also, despite large dams in the area, the tortoises do not seem to need these to supplement their water, probably getting it from food sources.