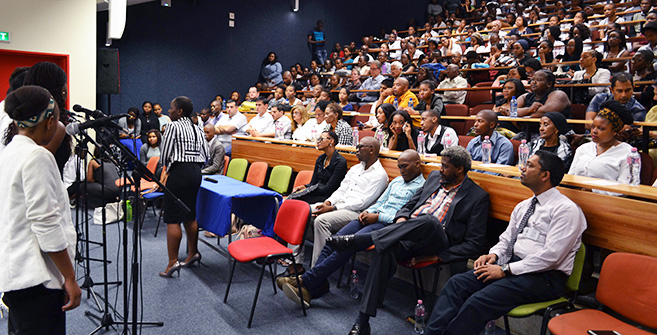 A memorial service was held at UKZN’s Nelson R Mandela School of Medicine for final year Medical student Mr Tumelo Seliane, who died recently in a road accident in the Eastern Cape.

Seliane had been in a car with five student colleagues when the accident occurred.

One of the students involved, Mr Jacob Myeni, spoke at the service about what happened. He said the group had been returning to Durban after visiting a sick student colleague in Queenstown. A horse was in the road and when the driver swerved to avoid it, the car overturned and rolled several times.

A video slide show capturing moments colleagues had shared with Seliane was screened at the service. Fellow students described him as ‘a servant to others’.

Dean and Head of School, Professor Richard Hift, thanked the family for attending the service and for sharing their grief with the University community.

‘Students are the bridge into the future,’ said SRC President, Mr Gift Mlangeni. ‘The country has lost an activist.’

Mlangeni said although there were times when Seliane was frustrated by events at UKZN, he responded positively and made things happen. ‘He was a diligent student who did not only want to understand, but also wanted to change the world. Farewell to a dear friend, brother and colleague.’

Speaking on behalf of the class of 2015, Mr Nsizwenye Mkhwanazi said Seliane was an amazing person and would have made a great surgeon. ‘He was a fine example of what a student should be.’

Seliane’s best friend, Dr Nare Hopane, recalled the day they met in 2008. ‘He was the first guy who came and introduced himself to me on my first day at Medical School. After that he was a brother and a friend.’

Mr Ntando Makhathini and Mr Kusasaelihle Nene recalled how diligent and dedicated he was to the Sunday Happy Valley Clinic at KwaNqetho near Hillcrest.

‘Seliane’s loss is not only a loss to his family and Medical School, but also to the community of Happy Valley at large,’ said Makhathini, recalling how Seliane did house calls to attend to the sick in the community.