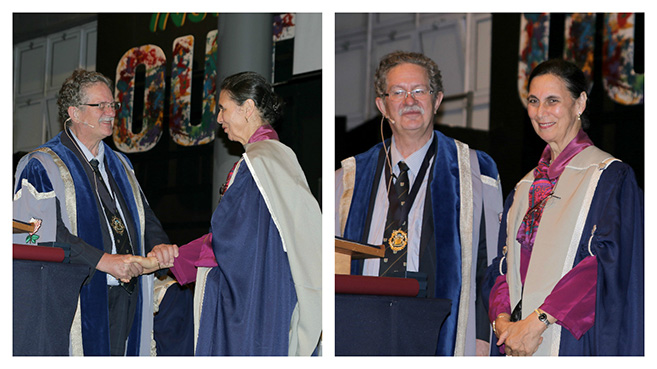 The Fellowship ad eundem is a rare honour to medically or dentally qualified persons of the CMSA who merit very special recognition.

According to the CMSA: ‘The Fellowship is intended to recognise and acknowledge exceptional contributions to the CMSA and/or exceptional attainments in the medical/dental professions especially in the Discipline for which the Fellowship ad eundem is being awarded. Persons elected to Fellowship ad eundem are so admitted at the customary CMSA admission ceremonies and their names are permanently inscribed in the Roll of Honour of the CMSA.’

Adhikari is currently a Scientific Advisor for the Postgraduate Office of the School of Clinical Medicine, working with undergraduate and postgraduate students. She is also a paediatrician and a registered neonatologist with a special interest in paediatric nephrology.

Cape Town-born Adhikari completed her MBChB degree at the University of Cape Town and served her internship at Somerset Hospital. In 1971, she joined the King Edward VIII hospital as a Medical Officer (Paediatrics), and then a Registrar in Paediatrics and later a Registrar in Medicine. Adhikari joined the former University of Natal’s Medical School in 1976 as a junior Lecturer in Paediatrics.

In 1996, she became a full professor and went on to become Head of Department of Paediatrics in 2001, a position she held until her retirement in 2010. Adhikari continued to serve the then Faculty of Medicine and later the School of Clinical Medicine, firstly as a postgraduate co-ordinator, and more recently as a Scientific Advisor.

Her work has been invaluable in the re-evaluation of policies and, particularly in reviewing and assisting students with their protocols for masters and PhD degrees. In addition she continued to make a contribution to the undergraduate medical curriculum, both in terms of advice and support for the academic coordinators, but also as a clinical teacher in Paediatrics.

Apart from these achievements, Adhikari developed objectives and outcomes for Paediatric Care and Palliative care. She was also responsible for the development of a Feeding and Weaning Clinic at UKZN’s Westville campus. Widely published in peer-reviewed journals, Adhikari’s research has focused on neonatal medicines, exclusive breastfeeding, tuberculosis in pregnancy and the neonate as well as the treatment of Hepatitis B virus.

Dean of the School of Clinical Medicine, Professor Richard Hift, congratulated Adhikari. ‘Miriam epitomises that very special type of staff member we are fortunate to have in the School. She is an outstanding clinician and teacher, known for her research, enjoying national and international respect and recognition, devoted to the School and its students, and making a profound and active contribution to its success long into retirement. We are very fortunate to have had benefited from her association with us, both previously and currently. We congratulate her on this well-deserved award.’