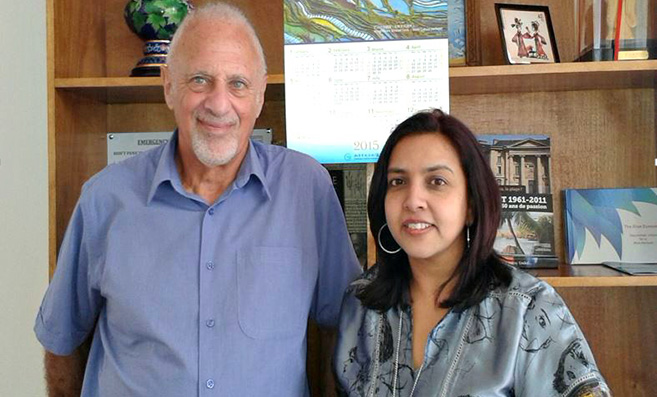 Academic Meets the Vice-Chancellor of University of Seychelles

Naidu was a guest of the University at the invitation of the Director and Head of ECRI, Dr Jemma Simeon. Naidu was invited to present a Gender Workshop to the Social Work staff and to offer a guest lecture to the third-year Social Work students in the Faculty of Social Sciences at the Anse Royale Campus.

‘The students proved a highly interactive and receptive group who were mainly already social work practitioners with a three year Diploma that they were converting into a formal Social Work degree. Many expressed their disillusionment with what they saw as aspects of routinised and disconnected service care model, especially towards vulnerable groups in Seychelles such as women, children and the differently-abled,’ said Naidu.

Naidu’s lecture expanded on a cultural diversity lens by drawing on methodological tools in anthropology. The lecture was also attended by Dr Susan Alderson, lecturer in the Social Work programme.

Alderson commented, ‘It was great to see the students responsive and interactive with Dr Naidu. They are usually a shy bunch, but were prepared to engage with even certain taboo subjects such as social work practitioner ethics and working with same sex couples etc.’

Naidu added that gay and lesbian relationships were not legal in Seychelles. However employing a cultural diversity lens allowed me to broach these sensitive issues in a manner that allowed the students to look at such kinds of diversity within the context of a social care model, especially as some of them wished to pursue careers as social workers abroad, in other countries and cultural contexts, said Naidu.

‘I was really impressed by the work of the small team of Social Work lecturers, who were from both Seychelles, as well as Mauritius and the United Kingdom,’ said Naidu.

The Gender Workshop that Naidu hosted with the social work lecturers working with the above students was a session on reflective practices in the context of researching, teaching or doing activism work in the context of gender and was also attended by the Project Co-ordinator at the Gender Secretariat in Victoria, Ms Nicole Amelinè.

The visit ended with a meeting with the Vice-Chancellor. Emeritus Professor Dennis Hardy was the Deputy Vice-Chancellor at Middlesex University in the United Kingdom before being head hunted to University of the Seychelles (UniSEY).

Although a young university, UniSEY offers fully accredited degrees and is also accredited to offer University of London degree courses so that international students can study for these in the Seychelles at a lower cost than if they were to spend three years in London. The establishment of the University also means that local students need not travel abroad for their undergraduate degrees.

Naidu’s role as Associate member of the Education and Culture Research Institute will include lending both teaching expertise as well as research expertise and skills to the Centre.

Under the guidance of Dr Simeon, the Centre is destined to grow in strength and has already made its mark by bringing together notable scholars when Dr Simeon and the Centre hosted an Education Conference in July 2015, which Naidu also attended. Dr Simeon is truly passionate about her portfolio, said Naidu.