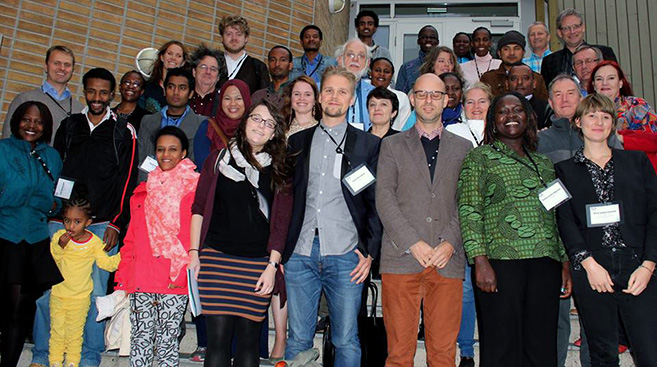 Dr Nicola Jones and delegates at a Global Journalism Symposium in Norway.

Academic Leader of Research Represents UKZN at Symposium in Norway

The Academic Leader of Research in the School of Arts, Dr Nicola Jones, represented UKZN at the Global Journalism Symposium, hosted by the NLA University College in Norway.

Jones presented a paper titled: “Damming the ‘Fountains of Justice’: An Examination of Three South African Publications’ Coverage of  Reeva Steenkamp’s Alleged Murder in the Context of South African Crime and Court Reporting”.

The Symposium, funded by the Norwegian Agency for Development Cooperation (NORAD), was the result of a collaborative project between NLA University College, the Uganda Christian University in Uganda and UKZN.

The Symposium aimed to bring scholars from across the world together to discuss and exchange ideas on topics including comparative journalism, journalism culture, values in journalism practice, new media practice and media development.

Jones explained that some interesting avenues in journalism which align with her research interests relate to ‘an emphasis on “news satire” in both written pieces and cartoons and the question of ethical dilemmas presented by social media for both African journalists and also citizen journalists in Africa’ - a question her paper addressed quite extensively.

Jones’s findings indicated that the instantaneous nature of news as a consequence of technology was a factor in the stories examined, where competitive edge and haste were found to be the governing principles of news. Her findings also showed that ‘there was a judgemental tone in those stories and an assumed guilty bias.

‘That could lead to a potential opposite scenario, where the public perception does not fit the outcome of the trial,’ said Jones, who was at the Symposium with senior UKZN colleagues, Emeritus Professor Keyan Tomaselli, the Head of the Centre for Communication, Media and Society (CCMS), Professor Ruth Teer-Tomaselli, and post graduate students, Ms Emilly Maractho, and Ms Sara Namusogo.

Jones said a highlight of the Symposium was the opportunity to network with international colleagues and students in the city of Kristiansand where the university was situated.