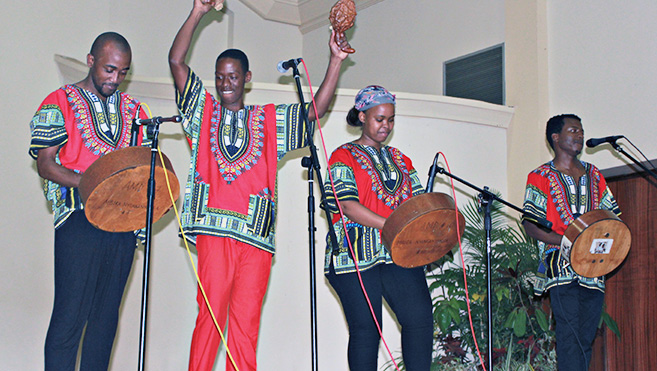 AMD Students Present Year-End A Taste of Many Tongues Concert

The African Music and Dance Ensembles within the School of Arts, Music Discipline recently presented their last lunch-hour concert for the year entitled A Taste of Many Tongues that showcased a variety of artists, performing different dance routines from across the African continent. The performers and performances were drawn from five African Music and Dance ensembles which include the Mbira, Timbila, Isicathamiya, Umzanzi and Zulu ensembles.

Within the production, audiences were treated to Timbila and Mbira music. The Mbira ensemble performance included the songs Vanokaiwa and Tiritose/ Sisonke. Speaking about some of the songs that he arranged Mr Innocent Tinashe Mutero said, ‘The song Vanokaiwa is a Shona social commentary which speaks to the life of most African fathers. The title Vanokaiwa is derived from the verb “kukaiwa” which means being troubled or bothered.

‘The song tells the story of a father who has a lot bothering him. The troubled father drowns his sorrows by drinking beer. Tiritose/Sisonke means ‘we are together’ and the song is an instrumental piece in which the ensemble expresses their individual abilities with the Mbira, Djembe and Shakers. The song is a celebration of diversity and the relationships built within the course of the last semester’, said Mutero.

Ensemble teachers Ms Nozuko Nguqu and Mr José Alberto Chemane were primarily responsible for arranging the concert, both agreeing on a theme that defined the concert 'A Taste of Many Tongues.’

Nguqu said, ‘It was an enjoyable moment working with the AMD team. For AMD 1, I encouraged them to come up with their own ideas so that their performance could have their feel, not just mine as a teacher.’

Chemane further added, ‘The concert was a platform for the African Music and Dance students to showcase and celebrate the beautiful, multilingual and polyphonic menu of sounds and dance movements that South Africa, Mozambique and Zimbabwe offer, promoting in 'Many Tongues' the spirit of Peace, togetherness and tolerance amongst one another.’

The first piece Thembweni, is an arrangement of a popular Chopi song usually performed to celebrate a good harvest season. The second piece, Tufo dance is a traditional dance from the north of Mozambique done by women through singing and hand drumming accompaniment done by men.

The concert ended with a beautiful finale that brought all the ensembles together.  The finale song was conceptualised by Mr Sfundo Mbanjwa titled Ikuph'imbizo which is a public domain song.

‘What I liked most about all the ensembles they represented all the tongues, and very well too, especially when AMD 1 did 'Usizo lwami'- my help, they made it their own as one could see that they meant what they said, both orally and physically- they represented the Zulu language with Ngoma dance’. ‘And when AMD 2 did Thembweni a popular Chopi song, I felt I was in Mozambique, they performed so well,’ added Nguqu.

Some of the other performance items included the Isicathamiya ensemble by the AMD1A class, which include three parts, as explained by Mr Sibonelo Ndlovu, ‘The first song Sebehlasela Umoya Wami is a praying song where we ask God to protect us and our souls from evil spirits; the second song is Yeyi Wezinsizwa, that looks at false perfection and asking communities to work together to take charge of governmental laws. Lastly, was Kumnandi Ukucula which seeks to heal the broken heart and soul.’

Director of the African Music Project, Dr Patricia Opondo added, ‘It’s been a wonderful semester with an inspiring, dedicated team of teachers who’ve contributed to the artistic growth of the program. Each student has excelled and many have exceeded expectations.’

She also nominated Mr Nu Luthuli as the 2015 AMD Outstanding Teacher of the Year, who has helped grow the isicathamiya ensemble to new heights, further congratulating him on his achievements which Luthuli described as a ‘humbling recognition’.

According to Dr Opondo, some of the recent performance highlights from the Project for the year, included participating in the International Timbila Festival in Mozambique in August, performing during the ICTM International Musics Symposium and the 10th African Cultural Calabash.

Speaking about the AMD students, Dr Opondo added, ‘A Pan-African coming together of beautiful souls, who create magic when on stage. Blurring the lines between staff and students, as it is a creative meeting point of explosive music/dance talent that has grown to be the characteristic signature of the AMD ensembles. Viva AMD! I’m really proud of the AMD students and teaching team as they never disappoint.’

The students also expressed their gratitude to Dr Opondo, the Centre for Jazz and Popular Music concert organiser Ms Thuli Zama and the students and staff who attended the various performances over the course of the year.