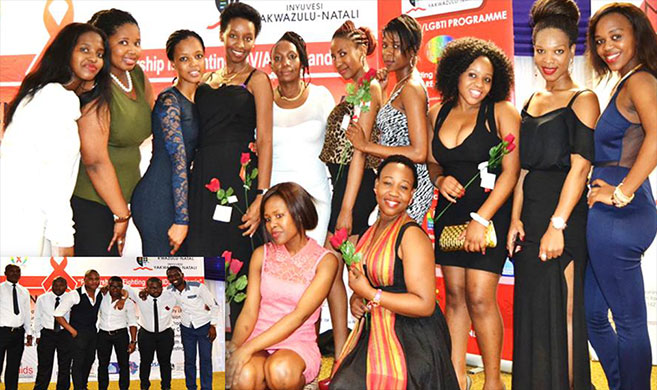 We Love, We Care Celebration

The UKZN HIV/AIDS Programme hosted its highly anticipated We Love, We Care Women’s Celebration event in honour of all female students and staff.

The Central Men’s Forum of the UKZN HIV/AIDS Programme organised the event to extend its appreciation to its female counterparts and to stand against gender based violence and other social ills that impact women in South Africa.

Deputy President of the Central Men’s Forum, Mr Thula Dlamini explained the reason for the event, welcomed all the women and reminded them how special they were. Dlamini made it clear that the Men’s Forum was against all forms of violence directed towards women.

President of the Men’s Forum and founder of Men in Responsibility, Mr Khethani Njoko, empathised with the women who were still angry at the men who had hurt them in their lives. In his capacity as the President of the Men’s Forum, he apologised on behalf of all men who had hurt women in the past and reaffirmed that the forum was a relevant platform through which to correct these wrongs, to teach young men to be responsible and to treat women with respect. He encouraged all women to radiate confidence and to value themselves.

Gospel artist, Mr Babo Ngcobo cautioned women about men who use religion to oppress them. Ngcobo congratulated all women for excelling in their studies and wished them all the best for their future endeavors. He said that women should be commended for their strength and ability to endure the types of hardships they have encountered in the past.

A variety of entertainment kept the audience occupied.

The programme was honoured by the presence of Ms Nomonde Magantolo (who is the Programme Coordinator for the UKZN HIV/AIDS Programme) and closing remarks were made by Mr Mxolisi Nkomo, the secretary of the Men’s Forum who thanked everyone for making the event a success.