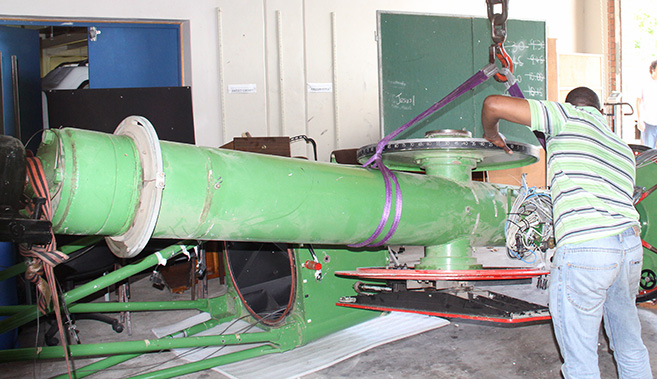 UKZN’s new telescope being unloaded on the Westville campus.

UKZN’s School of Mathematics, Statistics and Computer Science proudly took delivery of its first telescope this week, which coincided with the 2015 introduction of the School’s first Astronomy module.

It is hoped to have the telescope up and running by 2016 so that students can do observational projects on it.

Donated by the South African Astronomical Observatory (SAA0), the 0,75 metre telescope was off-loaded on the Westville campus, having arrived safely from Sutherland in the Northern Cape where it had been handed over.

UKZN and the University of the Free State were the two universities chosen from various applicants to receive a telescope each.

SAAO’s clearly laid out requirements of ensuring that the telescopes would be used for student training, advancing scientific research and public engagement, were met by the two tertiary institutions.

Dr Matt Hilton of UKZN’s Astrophysics and Cosmology Research Unit (ACRU), who travelled to Sutherland to help pack up the telescope for transportation along with Physics Lecturer Mr Mbuso Cele, said the School planned to build a housing installation for the telescope.

The measurement, ‘0,75’, refers to the diameter of the telescope’s primary mirror, which is 75cm. ‘The bigger the telescope mirror, the more light you can collect, allowing you to see more distant, fainter objects like galaxies,’ explained Hilton. ‘UKZN has never before had a telescope of this size. We will use it to give students hands-on experience of conducting simple observational astronomy research projects. There is a need for this in the country, and we hope future UKZN graduates will be leading scientific investigations using facilities like the Southern African Large Telescope and the Square Kilometre Array.’

Hilton said that once operational, members of the public would also be able to look through the telescope on public observing evenings.

‘This is a major undertaking that is the first for the province,’ he said.

UKZN’s telescope was previously used for various infrared and visible light studies of stars, including the supernova that exploded in 1987 in our nearest neighbouring galaxy, the Large Magellanic Cloud.