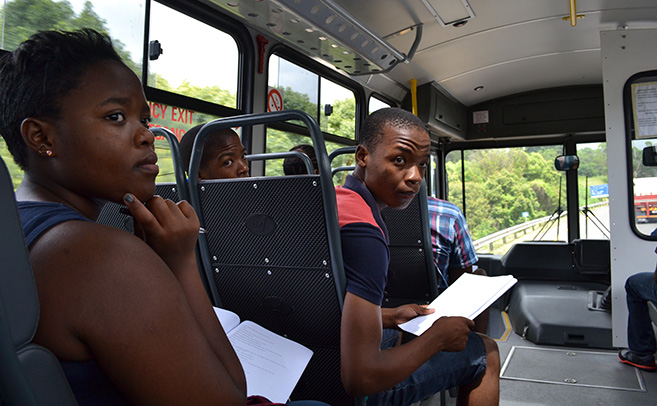 First-year Medical students familiarised with local clinics and hospitals on their way to visit Pholela Community Health Centre as part of the orientation programme.

UKZN is serious about training doctors to serve both urban and rural communities in line with the national Department of Health’s (DoH) primary health care re-engineering programme.

As part of the University’s extensive academic orientation and integration programme for 2015, first-year Medical students went on an inaugural academic visit to the Pholela Community Health Centre in the rural Sisonke Health District of KwaZulu-Natal.

The trip was organised by Dr Stephen Knight of the Discipline of Public Health Medicine together with the Rural Health Department headed by Dr Mosa Moshabela at UKZN, and was aimed at sensitising students to the healthcare needs of all South Africans, especially those who live in under resourced communities of the province.

The Pholela Community Health Centre was the country’s first to be established by the Union Health Department in 1940. With a catchment population of about 17 819, it provides optimal community orientated primary health care to the people of KwaHlangani and surrounding areas, who usually travelled long distances for healthcare and were often unable to afford private medical care.

Led by three academics and members of the Medical Student Repetitive Council, the trip was a significant learning experience for the students because the National Health Insurance, which has a mandate from DoH, is premised on the ideology that all South Africans are entitled to access quality healthcare services.

The students visited various UKZN-affiliated clinics and hospital sites in KwaZulu-Natal on their way to Pholela, including the Inkosi Albert Luthuli Central Hospital in Durban and the Happy Valley Clinic in the Valley of a Thousand Hills which is run by UKZN students.

The students were warmly received at the Pholela Community Health Centre where they heard about the district’s approach to health promotion and disease prevention through community oriented primary care. The idea is not just to treat the individual but to go out and treat the whole community.

The students and the academics on-board agreed that it was a fun and educational trip.

The day ended with a picnic at Howick Falls.