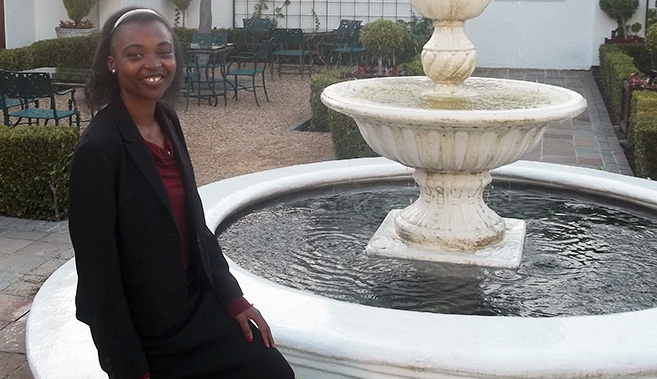 A PhD student in UKZN’s School of Mathematics, Statistics and Computer Science, Miss Milaine Sergine Seuneu Tchamga, has won first prize for Best Final Presentation at the Southern African Young Scientists Summer Programme (SA-YSSP) and was placed second at the event for her final report.

This secured her a three-month systems analysis scholarship to conduct research at the International Institute for Applied Systems Analysis (IIASA) in Austria.

Seuneu, who is completing her PhD under the supervision of Professor Jacek Banasiak, is undertaking research in the field of Applied Mathematics, focusing particularly on stability switch in ecological and epidemiological models. Seuneu’s research is aimed at developing a new method to solve a type of differential equation known as a stiff equation, for which methods currently used are numerically unstable.

The SA-YSSP in which Seuneu took part is organised by the IIASA, a non-governmental research institute focusing on international teams of experts in various fields working on policy-oriented research on global problems too large or complex to be solved by a single country, discipline or institution.

The IIASA, which has organised the Young Scientists Summer Programmes (YSSP) for several years, made a decision three years ago to move the programmes beyond just Austria, with South Africa being selected as the first host country. During the programme, select young scientists are paired with experienced researchers from the IIASA and other institutions to carry out research on projects relevant to the IIASA. The South African edition of the YSSP, supported by the NRF and organised by the University of the Free State (UFS), offers young scientists in South Africa the opportunity to learn and collaborate with internationally recognised researchers.

The SA-YSSP, a three-month academic training programme, saw 27 PhD students from 17 countries on five continents descend on UFS, with six nominated for the award of the scholarships after 18 external reviews selected the top three candidates, making it a highly competitive process. To have been rewarded during the SA-YSSP demonstrates the quality of Seuneu’s work, as only three young scientists are awarded IIASA-NRF Systems Analysis Scholarships, with the other two recipients being citizens of the United States of America and China.

During the SA-YSSP, Seuneu worked with her supervisor, Banasiak, and Professor A Davydov of the Frumkin Institute of Physical Chemistry and Electrochemistry at the Russian Academy of Sciences in Russia.

‘Miss Seuneu’s research pertained asymptotic analysis of multiple scale problems,’ said Banasiak. ‘In brief, it involves the study of complex systems with multiple time scales which often are too complex to allow and reliable and robust analysis. The main aim of the study is to find conditions under which such systems can be simplified without compromising the most salient features of their dynamics,’ said Banasiak. ‘Miss Seuneu studied some “pathological” cases when the expected changes of the dynamics of simplified systems were occurring with “unexpected” delays. This research is important in analysing, for example, multiple scale ecological systems as it allows for recognising situations in which the size of some species can drop below, or grow above, levels predicted by standard approximations.’

Seuneu’s interest in the field of Mathematics can be traced back to her early childhood, when she says she enjoyed working with figures and solving puzzles. From those early interests, Seuneu developed a passion for Mathematics above all of her other subjects, and by the time she entered college in her home country of Cameroon, problem solving for her involved challenging formulas.

She describes her passion for the subject as an ever-growing one and took on the challenge of the notoriously demanding subject to challenge the myth that an aptitude for maths is associated with males - an association she proves is no more than a myth.

Seuneu completed her undergraduate degree in Cameroon at the University of Douala, followed by a postgraduate diploma at the African Institute for Mathematical Sciences (AIMS), after which she undertook a masters degree at the University of Cape Town. After finishing her masters, Seuneu, pursued a PhD at UKZN because of its reputation as one of the top universities on the continent. Additionally, the calibre of staff at UKZN working in Seuneu’s field of interest, combined with their passion for their work and attention to their students, made the University the ideal fit for her.

Seuneu has enjoyed the experience of having qualified researchers in Mathematics providing her with motivation, insight and encouragement for her studies, saying she found UKZN to be an excellent and motivating institution to be a part of.

Seuneu hasn’t stopped with her research into the new method she is developing and applying with ecological models to prove its validity and efficiency. She is also the Communication Officer of the African Women in Mathematics Association (AWMA) whose aim is, among others things, to encourage young African girls to develop an interest in Mathematics.

‘The future looks so bright,’ says Seuneu when speaking of her goals. ‘It is my desire to first contribute to research and development in Mathematics, especially in solving problems that robbed my continent of its manful power. Secondly, my desire is to inspire many up and coming young Africans, especially girls, to engage in a career in Mathematics. For a long time now, Mathematics has been dominated by men, but I believe that this can be balanced by encouraging girls to also develop a positive attitude towards the subject.’

Seuneu will travel to the IIASA in May this year. ‘It’s an honour for me and I’m highly indebted and grateful to God for His grace and to my supervisor Professor Banasiak for his significant support, guidance and help without which this work could have not been possible. This opportunity will grant me the chance to interact with international experts in the field of Mathematics and I hope to greatly benefit from their vast and rich experience.’

Banasiak said Seuneu’s time at the IIASA would greatly contribute to her career. ‘She will be able to liaise with researchers who work on real world complex systems (some of them actually constructed models on which we worked during SA YSSP).  For me, her awards are really rewarding as they show that it is better to spend more time with good and deserving students rather than to simply go for large numbers of them.’