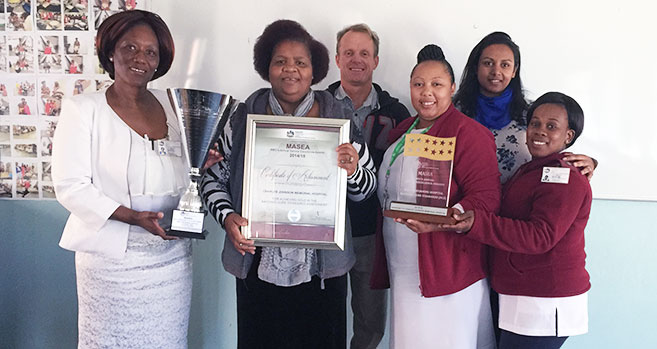 Dr Thameshree Naidu, a public health medical specialist, led and developed the risk management strategy for the hospital which is in Nqutu in the Umzinyathi Health District.

‘The commitment and enthusiasm of the CJM staff participating in the project played a major role in the achievement,’ said Naidu, who hopes that, given the success of her pilot project in the Umzinyathi Health District, the work will be taken further and developed to assist primary health care facilities reach compliance with the core standards.

‘This project was unique in that it capacitated Department of Health staff to plan their own solutions to their challenges given their unique context,’ she said.

CJM hospital CEO, Mrs MZ Khanyile, said: ‘We are very excited and humbled by the award. We have been working very hard with Dr Naidu and her team. We are very proud of what they achieved.’

Khanyile’s senior management felt the dashboard and risk register developed by Naidu’s team had filled a gap and had been central to their success.

Naidu said: ‘Both the hospital CEO and the M&E manager didn’t expect to win as they were competing in the category with hospitals such as Edendale and Greys. They said that being deep rural and not having skills and resources like urban hospitals, they didn’t think they had a chance.’

‘A current priority of the National Department of Health is the implementation of National Health Insurance. As part of preparation for this, all health facilities need to be compliant with the National Core Standards in order to be accredited for NHI,’ explained Naidu.

CRH developed an evidence-based strategy which is being piloted in the Umzinyathi District. The strategy has three components, including the introduction of Risk Management Committees, engaging the managers in action learning sets as well as developing a risk register.

The project started in the district in January last year and ends this December. ‘The project helps senior hospital management put systems in place, develop governance skills and interpret their own data. This helps ensure they are compliant with the National Core Standards,’ said Naidu.