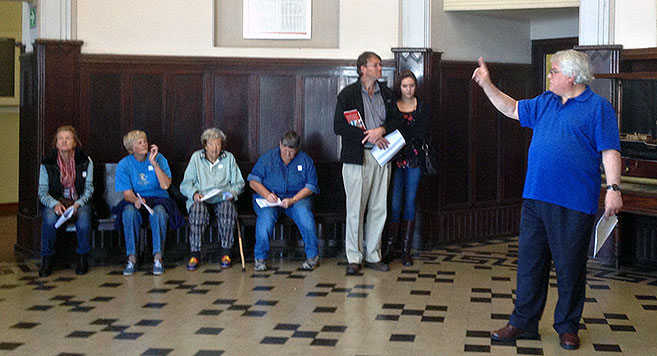 The Durban Art Deco Society (DADS) recently visited the Howard Davis Memorial College building and the Memorial Tower Building to view, discuss and marvel at the intricate architecture of the historical buildings.

The visit was arranged by Professor Michael Mulholland of the Discipline of Chemical Engineering and conducted by Professor Franco Frescura of the Architecture discipline, who provided thought-provoking commentary on the architectural and art deco features of the buildings.

The interior of the main entrance rotunda of Howard College is well known for its art deco embellishments, however Frescura took the discussion further, noting the symbolism of the orb, dome, barrel, cubic surround and wings, implying that architects of that era played a tantalising intellectual game with passers-by, challenging their cerebral sensitivities.

‘The atrium of the Howard College Building, on the other hand, was designed as a metaphorical mausoleum. Although the body of Howard Davis, the young man who died at the Battle of the Somme in 1916, rests in the fields of France, the centrally-located glass caisson placed beneath his portrait might as well contain Davis’ miraculously preserved corpse rather than a model of the ship he sailed in.

‘Unlike Egypt’s King Tutankhamun, whose tomb was packed with mere earthly belongings, Howard Davis’s eternity is now filled with the debates of countless academics whose intellects are more likely to keep him entertained than mere goods and chattels,’ said Frescura.

He noted that the Memorial Tower Building was a memorial to the democratic dead. ‘The building is better suited to celebrate the values of fascism and anti-historicism that signify the Modern Movement in architecture.’

Frescura found the juxtaposition of the Memorial Tower Building to the sensitive Howard College building almost intolerable. The scale, the placement, and the sheer brutality of Memorial Tower Building were all wrong. As a building which exudes such power, its roots seemed to be in the fascism of those that instigated World War 2, rather than in tribute to those who fell fighting it.

At the end of the tour, Frescura stated: ‘Modern Architecture is the architecture of the lumpen, because it equates simplicity and technology with stupidity and visual illiteracy. Less became more not because it is so, but because a totalitarian-minded Nazi fellow traveller said so, and like sheep, a flock of money-minded capitalists and bottom-line accountants followed him.

‘Lenin once remarked that western capitalists were so stupid that they would invest their money in the rope that would be used to hang them. Modern Architecture has proved Lenin right,’ said Frescura.