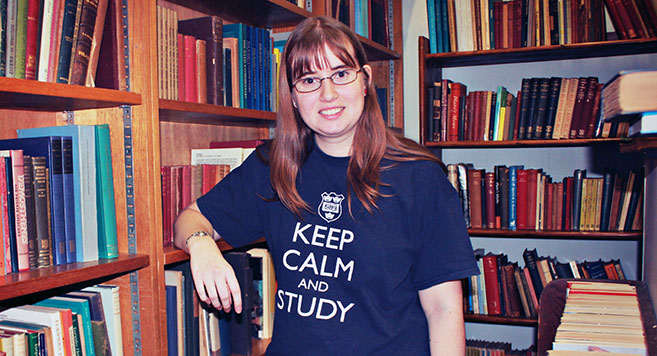 Classics doctoral student, Ms Sonja Gammage, has been awarded an NRF innovation scholarship as well as the prestigious Classical Association of South Africa’s Vogel Award to conduct research for her doctorate at Oxford University in the United Kingdom.

Gammage said having her research recognised through the two awards was a great privilege and a blessing.

‘The scholarship will aid with general finances while the Vogel Award is especially exciting as it will provide me with the opportunity to spend a couple months in Oxford where I can conduct research for my PhD.

‘I will have access to books and resources which are not easily accessible in South Africa. I will also have the advantage of discussing my work with experts in the field, some of whom I know from when I did my master’s Degree in Oxford.’

Under the supervision of Professor John Hilton, Gammage is researching a phenomenon in Hellenistic Greek known as Atticism. ‘Hellenistic Greek changed over the centuries much as English changed after Shakespeare's day, but people were critical of these changes and insisted that the Classical form of Greek was the “proper” form.

‘I am looking especially at how much the Hellenistic Greek novelist Achilles Tatius used the archaic “proper” language as opposed to the newer current-day form,’ explained Gammage.

She believes her research will increase the understanding and knowledge of aspects of the ancient world which can inform how one understands modern day issues.

‘All languages go through periods of change like Greek did and there is always some resistance to this change. Learning more about this ancient phenomenon can give us a better understanding about similar issues of language change happening in our own South African languages.’

Gammage thanked the NRF and the Vogel Award committee for their support and confidence in her research.